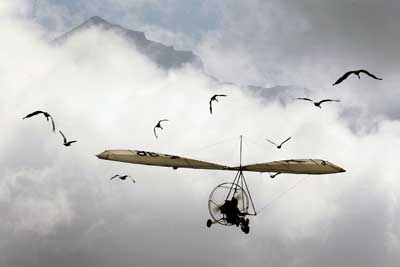 Submarines of the future speed through the water with the help of wiggling fish fins. Aircraft ascend through the clouds with flapping wings. In the desert, a climber steadily approa­ches the summit of a cliff, open palms effortlessly sticking to rock with the use of gecko-inspired nanotechnology. You've probably only encountered such nature-inspired future technologies in the imagined worlds of science fiction and comic books, but the design approach already exists. Inventors and engineers have been looking to nature for inspiration ever since prehistoric times.

Early humans learned hunting, shelter and survival techniques by observing animals as they interacted with their surroundings. While humans lacked the fierce claws and superior hunting instinct of bears, people could mimic their techniques. And as humans began to design ever-more complicated contraptions, they continued to look to nature's example. From Leonardo da Vinci's 15th-century sketches of flying machines to the Wright brothers' first successful prototype four centuries later, dreams of human flight centered on observing birds.

The world is full of amazing biological innovations, each one the product of millions of years of evolution. When designing technologies, it only makes sense to study the ways in which nature has already mastered the challenges involved. Today, we know this as biomimetics or biomimicry -- the practice of imitating models in nature to create better forms, processes, systems and strategies.

You encounter examples of biomimicry every day, perhaps without even realizing it. Velcro technology, for instance, was inspired by the way burred seed pouches cling to animal fur. Modern hypodermic needles take a few pointers from rattlesnake fangs. Nike has even ­applied the qualities of goat hoof traction to their running shoe designs.

In this article, we'll explore the ways in which biomimicry bridges the disciplines of biology and engineering, using the innovations of the natural world to improve technology and design.

Who would have thought sharks had so much to teach us? These sea creatures have inspired several biomimetic innovations. Shark skin consists of tiny, tooth-like scales that prevent small eddys and vortexes from forming (which slow them down). Speedo has replicated this effect with its Fastskin® body suits, which allow competitive swimmers to shave crucial seconds off their race times. Others have used this technology to create fast-traveling ship hulls that naturally deter the attachment of underwater organisms. Australia's BioPower Systems is working on a different shark-inspired innovation. The company hopes to anchor mechanical fins -- based on shark physiology -- in the middle of sea currents in order to generate hydroelectric power. 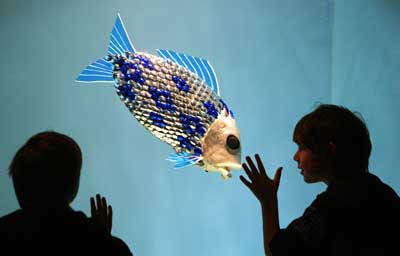 The biomimetic technology behind this robot fish is based on the common carp. The robot navigates and propels itself through water with its fins, just like a real fish.
Adrian Dennis/AFP/Getty Images

While the act of mimicking nature in human innovation has existed for ages, biomimicry came into its own as a prominent field of study and ethical stance in the late 20th century. American biologist Janine M. Benyus became a well-known leader of the movement in the late '90s with the publication of her book, "Biomimicry: Innovation Inspired by Nature." Since then, Benyus has gone on to found the Biomimicry Guild, an environmental consultation firm, and the Biomimicry Institute, a nonprofit advocacy group.

While development groups and researchers continue to be inspired by nature, Benyus pushes for a more comprehensive understanding of biomimicry in which nature is model, measure and mentor. Model refers to the basic principle of emulating nature in human design; and measure stresses sustainability.

The natural world, as a system, is considered sustainable, in that its systems reuse and recycle resources in an efficient, continuous manner. In comparison, most of our technology and way of life is unsustainable. This means the required resources are regularly depleted or permanently damaged. Benyus argues that a truly biomimetic approach to a problem should involve nature's sustainability.

Nature as mentor stresses a new way of viewing our environment -- breaking away from the industrialized view of the world as a collection of resources available for plundering. Benyus insists that any serious biomimetic project should do more than imitate the design and efficiency of nature. She says designers should follow environmental ethics. For instance, a solar-powered vehicle patterned after the movement of a sand crab might be an amazing invention. However, she says the product loses all of its biomimetic credibility if its primary use is to cut down rainforests or serve as a weapons' platform.

Benyus stresses nine laws of nature in her writings. She argues that each property should be of vital consideration to any truly biomimetic design. 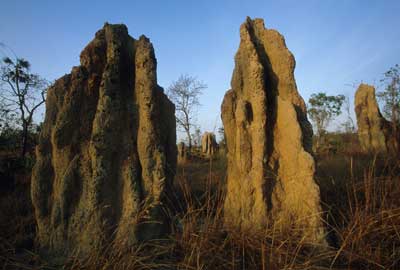 These cathedral termite mounds in Australia might not attract apartment hunters, but architects have already used the termites' self-cooling designs in the construction of energy-efficient buildings.
Peter Essik/Aurora/Getty Images

Biomimicry, as an innovating process, generally comes from one of two directions. Sometimes, the innovator sees a process in nature and connects it to an existing technology or problem. Other times, the innovator studies an existing design problem and turns to nature for help. This is where biomimicry serves as a bridge between biology and engineering.

The first step of solving a problem through biomimicry is to translate what you need out of a design into biological terms. For instance, what if you wanted to design a fire extinguisher with a longer range? Where in nature have organisms evolved to deal with a similar problem? Bombardier beetles might not deal with quenching a flaming stovetop, but they have evolved to squirt a heated, explosive stream of venom at predators.

Once discovered, the next challenge is to take the lesson from nature and apply it back to your design. In the case of the bombardier beetle, researchers studied the insect's use of a high-pressure "combustion chamber" in its abdomen. Designers have begun applying this discovery to existing spray technology.

You can find biomimicry in a number of different fields. Whatever the design challenge, there's a good chance a species on Earth has tackled a similar problem already. Consider these examples:

Nature's example: Certain African termite mounds must maintain a constant temperature of 87 degrees Celsius (189 degrees Fahrenheit) in order for the fungus crop to survive. To achieve this, they construct air vents that constantly move air throughout the mound, cooling or heating it to the same temperature as the mound itself.

Nature's example: Locusts avoid running into each other in swarms by using highly evolved eyes that allow these insects to see in several directions simultaneously.

Nature's example: Lotus plants must keep the surfaces of their leaves clean, despite living in muddy ponds and swamps. The leaves' tiny ridges and bumps keep water droplets from spreading across the surface. As a result, the water beads and slides away, carrying particles of dirt with it.

Biomimetic solution: Developers have applied this lotus effect to paint. When the paint dries, tiny bumps remain on the surface that help water droplets remove dirt.

Nature's example: The African resurrection plant completely dries out during yearly droughts and then revives itself when the rains returns. The plants contain a polyphenol that protects against cell membrane damage during dehydration.

Biomimetic solution: Researchers are seeking a way to use these sugars to preserve living vaccines through dehydration.

All over the world, researchers are looking to nature for answers to their various design challenges. By studying how evolution overcomes challenges, biomimicry may one day help us solve problems ranging from soap scum to global sustainability issues.