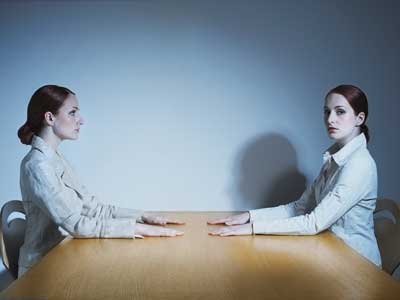 If twins inherit the same set of genes, how can they be so different?
A.B./Photonica/Getty Images

Unless you happen either to have an identical sibling or to know a ­pair, there's a good chance your knowledge of twins is based in part on fiction. They're everywhere in sub, pulp and popular culture, and it's hard to blam­e the artists for dragging them into the picture. After all, for a species obsessed with identity, is there a more tantalizing enigma than looking across a table at a physical duplicate of yourself?­

If you've seen even a few fictional portrayals of twins, you've probably noticed that the presentation tends to lean toward one extreme or the other. Either the twins are eerily alike (such as the little girls in "The Shining") or remarkably different (such as the dominant and submissive twin gynecologists in "Dead Ringers"). When two human beings look so similar, the things that make them different are just as perplexing as those that make them alike.

DNA plays a central role in modern conceptions of identity, but as our understanding of genetic science improves, so too does our understanding of what makes us who we are. Humans have long engaged in a debate of nature versus nurture, a dilemma with undertones of fate versus freewill. Are you the person you are because you were born that way or because of the world in which you've been brought up?

Obviously, if one identical twin grows up in the castle slums and the other grows up in the king's palace, they're liable to develop into rather different people, no matter how similar their genes are. The field of epigenetics adds new fuel to this issue by shedding light on how environment, nutrition and social conditions affect how genes are expressed. Was the twin in the palace brought up by an abusive stepmother? Did the twin in the slums have to contend with a house full of pipe smoke? Did one eat gruel while the other feasted on fatty desserts? These factors can cause epigenetic changes that alter how each twin's genes are expressed. Even a difference in diet could put one twin at risk for cancer and leave the other in the clear.

­In this­ article, we'll examine just how this fascinating field of genetics works, how epigenetic changes affect our lives and what the future may hold.