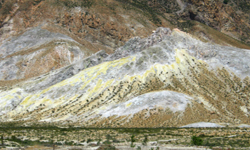 Sulphur is fine when it's found in mountains; not so fine when it builds up in the brain.
iStockphoto/Thinkstock

Within three days after her birth in May 2008, an Australian known as "Baby Z" in the medical literature began suffering seizures as a result of her rare genetic defect, molybdenum cofactor deficiency. As a result of an inability to produce enzymes that make the cofactor, sulphite builds in the brain to toxic levels, essentially melting it until the patient dies. Along the way, the child suffers seizures and excruciating pain; as a result of damage to the brain tissue, functions like swallowing and movement are impaired [source: Appignani, et al].

Baby Z represented the first time that the disorder was successfully treated. An experimental treatment developed in Germany was flown to Australia, received special approval for use in the country by an Australian court and was administered to the two-week old baby. After three days of treatment, the child became alert and stopped the twitching that accompanied her seizures. Within a few weeks, she was cured of her disease and is alive and well, with a brain that can process sulphite [source: West].