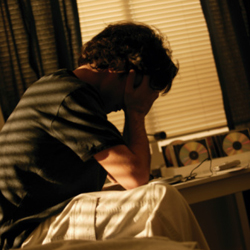 Michael Corke died exhausted after spending six months without sleeping as a result of a rare prion disease.
Comstock/Thinkstock

Up until 1990, a man named Toimi Soini of Finland held the world record for staying awake a full 276 hours, which equals 11 ½ days without sleep [source: Salkeld]. Although no one has bested Soini's record, it no longer appears in the Guinness books, since the organization withdrew the category entirely on health grounds.

That's because we need sleep and those who don't get to sleep at all, in fact, die. This was the horrific cause of death for Chicago music teacher Michael Corke, whose brain literally stopped shutting down and allowing him to sleep. Corke suffered from a rare form of prion disease called fatal familial insomnia, where the PrPc gene stops encoding proteins, which allows plaque to build up around the thalamus [source: Merck]. This brain region is responsible for regulating our sleep patterns, and with its transmissions interrupted by plaque, the mind and body remain in a state of wakefulness.

Within a few months Corke deteriorated into dementia. In an effort to shut his brain down, physicians induced a coma with sedatives and found that his brain continued to remain active [source: Flusfeder]. Corke died in 1992, six months after his insomnia first began.