Do We Need the God Helmet? 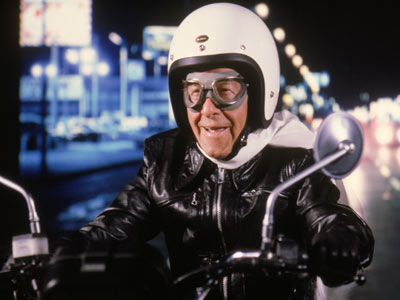 As we learn more about what happens in the brain during a religious experience, is it possible that we'll ever be able to create them ourselves? Could we flip a switch and see the face of God? No more meditation, prayer or fasting? A scientist named Michael Persinger thinks it's possible.

Persinger has gained attention for his work with the "God Helmet," headgear so named because it may induce a person to feel the presence of God. The God Helmet includes electrodes that Persinger uses to alter the electromagnetic field at the temporal lobes. Persinger claims he can create a religious experience for anyone by disrupting the brain with regular electric pulses. This will cause the left temporal lobe to explain the activity in the right side of the brain as a sensed presence. The sensed presence could be anything from God to demons, and when not told what the experiment involved, about 80 percent of God Helmet wearers reported sensing something nearby [source: BBC].

Will it work for everyone? Richard Dawkins, famous for his criticism of religion, reported only slight dizziness and twitching in the legs after some time in the God Helmet [source: Horgan]. Persinger says that some people may just be more genetically predisposed to sensing God or another higher power, and they may not need a God Helmet to do so [source: Hitt]. According to Persinger, naturally occurring electromagnetic fields can also cause religious experiences, particularly in those with this predisposition to sensing God. For example, powerful meteor showers were occurring when Joseph Smith, founder of the Church of Latter Day Saints, was visited by the angel Moroni, and when Charles Taze Russell formed the Jehovah's Witnesses [source: Hitt].

But is there any advantage to being genetically open to God? Scientists are trying to discern if there's an evolutionary reason for why our brains are so receptive to religious experiences. Religion might be a side effect of a developing brain; our brains needed ways to explain the world around us, so they may have created a belief system that could serve as kind of default place to turn in the case of questions. Religion could serve that purpose to early man, with its somewhat supernatural stories to explain cause-and-effect. But now, religion is an expensive trait to carry forward; it involves time and sacrifice, such as fasting. And now, there are scientific methods to explaining the world. Shouldn't religion have died by now?

Atheists may, of course, say yes, but as one anthropologist points out, even some atheists cross their fingers when a plane experiences turbulence. This may indicate that our brain will always seek out some sort of transcendental hope or otherworldly protection, even if it's not called God [source: Henig]. And some evolutionary biologists argue that there are important individual and collective benefits to a mind hardwired for religion [source: The Economist]. Individually, people who believe that someone bigger than themselves is watching them may make better choices in terms of their evolutionary fitness; they may be less likely to drink or engage in other dangerous behaviors if they feel something or someone higher than them may disapprove. But the real benefit may come down to a facet of Darwinism that doesn't get much attention anymore: survival of entire groups.

One study evaluated the success of various communes in 19th-century America. The communes with a secular ideology were four times as likely to disband in any given year [source: The Economist]. But in religious communes, such as modern-day kibbutzim in Israel, those subject to the strongest religious rules have been shown to be the most altruistic and cooperative of the bunch. In tests that examine an individual's generosity when the entire group is at stake, those living in these types of communities of faith are more likely to pool resources, which promotes the survival of the collective [source: The Economist]. Religion in that sense is a way for people to work together, to have an interest in an entire group's survival due to shared beliefs.

While scientists in the field of neurotheology continue to examine these types of issues, head on over to the next page for more interesting articles on the brain.