Returning to the Moon 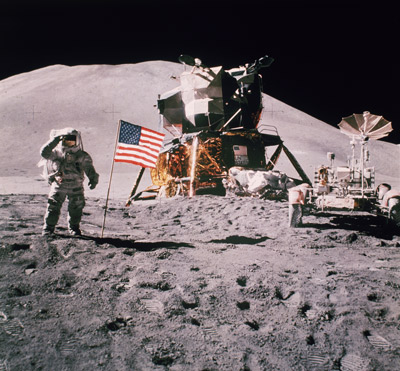 Apollo 11 was the first U.S. mission to land on the moon, but it wasn't the last. Here are rundowns of the other six moon missions:

Before taking his final step off of the moon, Gene Cernan uttered the last words to be spoken on its surface: "We leave as we came and, God willing, as we shall return, with peace and hope for all mankind."

After six moon landings, American scientists had a greater understanding of our nearest celestial neighbor. They determined the age of the moon -- about 4.5 billion years -- and came up with a theory for how it formed.

After the Apollo program ended in 1972, NASA did not send any more astronauts to the moon. With the country mired down in the Vietnam War, the once enraptured public was beginning to lose interest in the space missions. In the next section, we'll learn about the future of lunar exploration.

What We Left Behind

The Apollo missions left six American flags on the moon -- one for each landing. Scientists believe they are still ther­e, although they're not sure whether the flags are standing.