Profiles of the Lunar Landing Missions 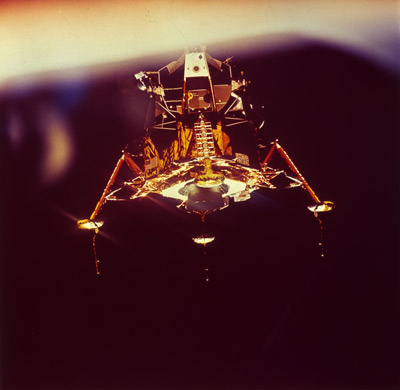 These modules were attached to a Saturn V rocket. Powered by liquid hydrogen and as tall as a 36-story building, the Saturn V was made up of three stages. The first stage boosted the rocket through the first 38 miles (61 kilometers) of ascent. The second stage sped the rocket through the upper atmosphere and into the Earth's orbit. The third stage propelled the craft to the moon.

Once under way, the crew separated the Command and Service Module from the third stage and fired its engine. They released the third stage and sped toward the moon. They then turned the module around and docked it nose-to-nose with the Lunar Module.

The astronauts in the Lunar Module put the engine into full throttle to begin their descent to the moon. More than a dozen small thrust motors helped control the direction and speed of the descent to land the module gently. Because the moon has no atmosphere, the crew members couldn't calculate their altitude and airspeed. The Lunar Module sent out microwave beams to the moon's surface to provide information on the spacecraft's position.

At just a few thousand feet above the moon's surface, a computer onboard the spacecraft initiated the approach phase. The computer needed to adjust both horizontal and vertical speeds to almost zero, while the crew had to adjust for craters and other formations on the moon's surface to avoid crashing.

The Lunar Module commander had the choice of whether to land automatically using the craft's computers, or manually, depending on how clear the landing site was. The pilot had learned how to steer the craft into a landing during simulations on Earth. When the Lunar Module landed, the commander hit the engine-stop button. The craft went into zero-gravity for a second and then the rocket engines on its bottom platform lowered it to the moon's surface.

The next challenge was to re-enter Earth's atmosphere without burning up like a meteor. To avoid this, the module was coated in an ablative covering that burned away as it entered Earth's atmosphere and protected the spacecraft underneath from the intense heat.

In the next section, we'll learn about subsequent trips to the moon.