The Race to the Moon 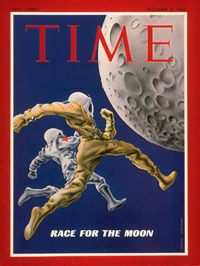 In the 1950s, the United States was locked in a race with the Soviet Union for dominance in space. The competition grew out of the Cold War. On Jan. 2, 1959, the Soviet Luna 1 spacecraft made the first lunar flyby at a distance of 3,725 miles (5,994 kilometers) from the moon's surface. The Russians were also the first to impact the moon on Sept. 12, 1959, with the second Luna mission.

But on May 25, 1961, President John F. Kennedy issued a challenge in his speech to Congress: "I believe that this nation should commit itself to achieving the goal, before this decade is out, of landing a man on the moon and returning him safely to Earth" [source: NASA]. American astronauts accepted the challenge, and on March 3, 1959, the Pioneer 4 probe became the first American spacecraft to fly by the moon.

The U.S. Ranger program, which ran from 1961 to 1965, sent nine missions to the moon. In 1962, Ranger 4 reached the lunar surface but was unable to send back any data before it crashed. Two years later, Ranger 7 captured and sent back more than 4,000 photos before it hit the surface of the moon.

The next step in the race to the moon was to land a craft gently without crashing. The Soviets beat the Americans, touching down the Luna 9 on Feb. 3, 1966. However, the Americans weren't far behind. The Surveyor 1 mission made a controlled landing on the moon about three months later.

All of these steps in lunar exploration were leading up to the ultimate goal: landing a manned spacecraft on the moon. However, tragedy struck during a preflight test on Jan. 27, 1967, when a fire swept through the Apollo Command Module, killing astronauts Roger Chaffee, Virgil "Gus" Grissom and Edward White. NASA named the test Apollo 1 to honor the crew. Because of the fire, NASA put its lunar launchings on hold for a year while it redesigned the module.

The delay wasn't the only difficulty facing astronauts. In order to successfully execute a manned lunar landing, scientists had to get the spacecraft out of Earth's gravity, put it into orbit around the moon, land without crashing and return through the Earth's atmosphere without burning up.

And so NASA launched Apollo 7 into space on Oct. 11, 1968. The crew, made up of astronauts Walter M. Schirra Jr., Donn F. Eisele and Walter Cunningham, orbited Earth 163 times and spent nearly 11 days in space.

The Apollo 8 mission launched on Dec. 21, 1968. It was the first crewed mission to use the Saturn V rocket, which was powerful enough to take the spacecraft into lunar orbit. The crew of Frank Borman, James A. Lovell Jr. and William A. Anders circled the moon and successfully returned into Earth's atmosphere.

On March 3, 1969, the Apollo 9 mission launched. James A. McDivitt, David R. Scott and Russell Schweickart orbited Earth 152 times and practiced docking procedures between the Command Module (which would house the astronauts in space) and the Lunar Module (which would make the moon landing). They had to perfect these procedures before attempting an actual landing.

The final stage in the dress rehearsal came on May 18, 1969, with the launch of Apollo 10. It involved every step of a lunar landing -- except for an actual landing. Commander Thomas Stafford and Lunar Module pilot Eugene Cernan lowered the Lunar Module to within 50,000 feet (15,240 meters) of the moon's surface, while John W. Young remained in the Command Module in lunar orbit.

In the next section, we'll learn about the first moon landing.

Was the Apollo 11 Moon Landing a Hoax?

Some skeptics still believe that the Apollo 11 lunar landing was simply a movie studio hoax staged by NASA. In 2001, the Fox television network aired a program that gave the hoax theory second wind.

Guests on the show suggested that NASA didn't have the technology to pull off a lunar landing in the late 1960s. They noted that the pictures of astronauts sent back from the moon didn't show stars in the sky. A NASA expert refuted this by explaining that the stars wouldn't have shown up on film because the foreground image (the astronauts' space suits) was so bright.

People who are still unconvinced by the overwhelming evidence of man's landing on the moon can visit the National Air and Space Museum in Washington, D.C., where samples of rocks taken from the moon's surface are on display.