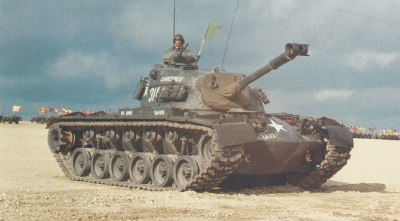 In the beginning, the M-48 General George S. Patton Medium Tank was a hard luck tank. When the Korean War began in June 1950, the United States had only the obsolete M-4 Sherman Medium Tank in inventory and no newer medium tank in production.

An interim medium tank, the M-47 General George S. Patton Medium Tank, was rushed into production and then to Korea. But the M-47's performance was not considered satisfactory in the face of the new Soviet medium tank, the T-54, that was then entering service.

In 1950 the Detroit Tank Arsenal and the Chrysler Corporation were each awarded contracts to develop a new medium tank armed with a 90mm gun. They were told to do so as quickly as possible. The new tank was given the developmental designation T-48, based on the earlier T-42.

Design work began in December and was completed one year later. Even before the first prototypes were finished in March 1952, production contracts were awarded to Fisher Body Division of General Motors and to the Ford Motor Company. The first M-48 tank came off the assembly line in July 1952.

The Cold War, begun in earnest with the Berlin Blockade in 1948, gave every appearance of turning hot in the early 1950s. The fall of Nationalist China, the disappearance of eastern European countries behind the Iron Curtain, communist insurgencies in Malaya and the Philippines, and the invasion of South Korea by North Korea had many military planners convinced that war with the Soviet Union was only a matter of months away.

All M-48 Patton models except the final M-48A5 were equipped with the 90mm main gun, which fires a large selection of ammunition types.
©2007 Publications International, Ltd.

In the U.S. Army's haste to get the M-48 into production, problems were overlooked or ignored. Many of the problems came back to haunt the tank and its crews, earning the M-48 a reputation as a badly designed tank.

Virtually all the early models had to be rebuilt to later configurations. Once this was accomplished, most complaints and problems faded away. But problems or no, the Army had accomplished its purpose. The M-48 was a tank fully capable of standing up to the T-54 series of Soviet tanks.

The M-48 had a cast-and-welded hull with an escape hatch built into the floor. The turret was a one-piece casting, the front wall of which was 4.3 inches thick.

The usual hull-mounted machine gun was eliminated in favor of more ammunition storage for the main gun. This also allowed the driver to be seated in the center front of the hull.

For more on the M-48 General George S. Patton Medium Tank's equipment, continue to the next page. 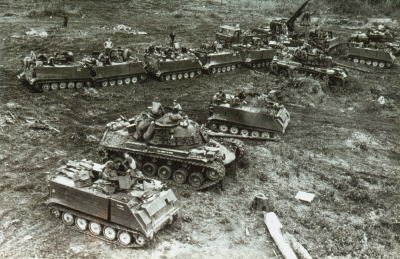 M-48A2s and armored personnel carriers of the 11th Armored Cavalry Regiment prepare for a sweep through Cambodia in 1970.
©2007 Publications International, Ltd.

The M-48 General George S. Patton Medium Tank equipment was impressive. As in the M-47, the gunner was located on the right side of the turret, the loader on the left, and the commander behind and higher.

The loader had a hatch that opened to the rear. The commander's cupola could be traversed manually and had a sight for the .50 caliber Browning M2 HB machine gun.

The original General Motors Corporation 810-horsepower gasoline engine and a fire extinguishing system were mounted in the rear compartment. The engine drove the rear drive sprocket through a planetary gear transmission.

The M-48 used torsion bar suspension with six relatively small road wheels per side. Five return rollers were used in the M-48 and M-48A1 configuration but only three in the M-48A2 and later variations.

The M-48 was equipped with infrared driving lights, and an infrared/white light searchlight was mounted above the main gun.

The M-48 was the first American tank to be fitted with a nuclear-biological-chemical (NBC) protection system and warm air heaters for crew comfort. A bulldozer blade kit was developed, and all M-48s had provisions for mounting it on the hull.

The 90mm M41 main gun used in the M-48 and M-48A1 was equipped with an evacuator, a muzzle brake, and a vertical sliding breech mechanism. The main-gun range finder fed information to the commander's station and the gunner's station.

The gunner's ballistic computer was electrically operated but worked on mechanical principles. Solutions to problems were simultaneously fed to gunner and commander.

The M-48 General George S. Patton Medium Tank has gone through seven model designations. In 1975 all M-48s of whatever configuration were again modernized to the M-48A5 standard. This modernization included improved armor, an improved fire control system, the 105mm M68 main gun, and a range of other modifications that increased the service life of the M-48 tank.

The diesel engine built by Continental was also replaced with an improved model that gave an even greater range. The coaxial machine gun was changed from the 7.62mm Browning 1919A4E1 to the 7.62mm NATO M73 machine gun.

A second 7.62mm NATO M73 machine gun was added at the loader's hatch position for antiaircraft use. The commander's hatch also had a machine gun.

The M-48 tank was adopted by at least 19 other nations, including Israel. In fact, the M-48 in various configurations, including variations of Israeli origin, has served with Israeli forces in every war since 1956.

No active United States Army units have been equipped with the M-48 Patton since 1984, when the last M-48s were withdrawn from the 2nd Infantry Division in South Korea.

See the next page to find specifications for the M-48 General George S. Patton Medium Tank. 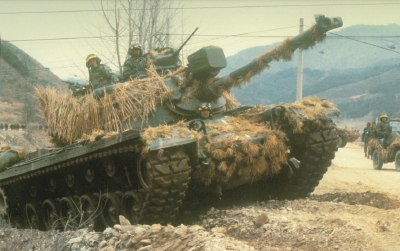 After its disappointing introduction in 1952, the M-48 General George S. Patton Medium Tank underwent a series of changes designed to improve performance. Find the specifications for this medium tank below.