Browse the article Meet '`Oumuamua,' the Strange Interstellar Asteroid That Sent Us a Message 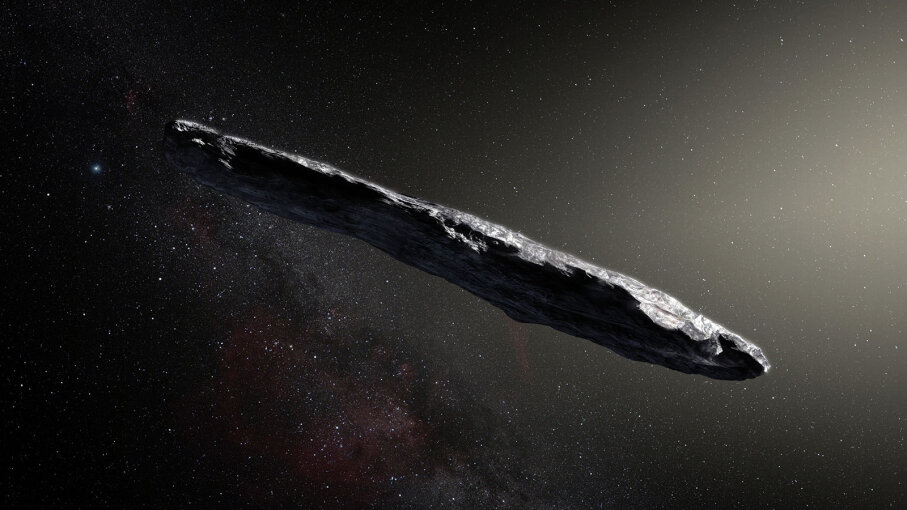 In the classic 1973 Arthur C. Clarke science fiction novel "Rendezvous With Rama," a mysterious object is detected outside the orbit of Jupiter as it rapidly approaches the inner solar system. Traveling at high speed and on a hyperbolic trajectory, the object is obviously not from our solar system; it's from interstellar space.

On Oct. 19, astronomers detected their own "Rama."

An object traveling at 60,000 miles per hour (96,560 kilometers per hour) was detected by the powerful Pan-STARRS1 telescope in Hawaii. Follow-up observations revealed that this object had already sped through the inner solar system, having made closest approach with the sun in September. It was on its way back out into interstellar space after being deflected by the sun's gravity. Analysis of its speed and trajectory confirmed that it had come from another star and had likely been adrift in interstellar space for hundreds of millions of years (at least) before encountering our star system.

Although the parallels with science fiction are obvious, the object – designated 1I/2017 U1 (`Oumuamua) – is quite a bit smaller than Rama's fictional 34-mile (55-kilometer) long cylindrical mass and (probably) not an alien starship.

With time of the essence, since `Oumuamua was receding into the dark and traveling at great speed, astronomers were able to use some of the world's most powerful telescopes to precisely measure the fading light reflecting off its dark surface. `Oumuamua is a 1,312-foot (400-meter) long asteroid with no trace of any dust surrounding it. As it has been careening through space for eons, its surface is reddish, an indication that it has been exposed to high-energy cosmic rays for millions (or maybe even billions) of years. It's a rocky asteroid, but it's unlike anything we've ever seen before.

On studying the interstellar asteroid with the FORS instrument on the ESO's Very Large Telescope in Chile, its "light-curve" revealed something truly bizarre. Spinning at a rate of once per 7.3 hours, `Oumuamua was revealed to be extremely elongated – like a supersized spinning space cigar.

"This unusually large variation in brightness means that the object is highly elongated: about ten times as long as it is wide, with a complex, convoluted shape," said Karen Meech, who works at the Institute for Astronomy in Hawaii, in a statement. "We also found that it has a dark red color, similar to objects in the outer solar system, and confirmed that it is completely inert, without the faintest hint of dust around it."

We know that asteroids in our solar system come in many shapes and sizes, but we've never seen something so extreme, and astronomers are at a loss as to how `Oumuamua took this shape, though it appears to be composed of the same materials that are found inside regular asteroids.

In a study published in the journal Nature on Nov. 20, Meech's team writes that the detection of `Oumuamua suggests "previous estimates of the density of interstellar objects were pessimistically low," and that upcoming upgrades to asteroid survey telescopes (like Pan-STARRS) will likely detect more of these interstellar visitors over the coming years.

"We are continuing to observe this unique object and we hope to more accurately pin down where it came from and where it is going next on its tour of the galaxy," added astronomer Olivier Hainaut in the ESO statement. "And now that we have found the first interstellar rock, we are getting ready for the next ones!"

Although other interstellar vagabonds have been buzzing our solar system for as long as our sun has been burning, this is the first-time astronomers have been able to confirm the origin of an asteroid from another star. And `Oumuamua is a stunning discovery that not only confirms the existence of these interstellar objects, its strange shape will inspire debate because how such an elongated asteroid could form is, for now, a mystery.

Now That's Interesting
"`Oumuamua" is Hawaiian for something that is a "scout or messenger sent from the distant past to reach out to us." The Pan-STARRS discovery team chose the name.