If we picture the solar system, we often picture our dominant star at the center of things, static and immobile as planets orbit circles around it. That picture makes things simple to understand, but technically it's inaccurate. Take our largest planet Jupiter, for instance. It doesn't orbit the sun's center — it orbits a spot in empty space between it and the sun called the barycenter. This is because the sun doesn't just exert gravity on Jupiter — Jupiter's so big that its own pull affects how the sun moves, too.

The sun is about 1,000 times more massive than Jupiter, and these two bodies affect one another proportionally according to distance and mass, so the amount Jupiter's gravity pulls on the sun is one-thousandth the amount the sun's gravity pulls on Jupiter. And Jupiter's orbit takes 11.8 Earth years to complete, and the sun travels around the barycenter takes the same amount of time.

That's not just a cool fact to impress people at dinner parties — after all, who doesn't love a person that begins sentences with "Well, technically..." — the practical application is that planet-hunting scientists can look for a similar wobble in other stars and infer the existence of other massive celestial bodies.

And if we are getting technical, it's worth noting that no other planets orbit the exact center of the sun, either. But the amount they affect the sun is so negligible that they effectively orbit the center, as their (our) respective barycenters are buried deep within the star's burning plasma.

One of the reasons for that is due to Jupiter's super-sized presence: If you piled all the other planets onto one side of an admittedly gigantic scale, then doubled that planet pile just for good measure, massive Jupiter would still outweigh all that.

Let's not despair, though. Not everything we've been taught is wrong! Learning more about the barycenters of orbits is a reminder that all things are connected and that all things influence one another — sometimes to a great degree, sometimes to one small, but always measurably. Our solar system is not a series of spinning circles — think instead of a throbbing math cloud, pulsing as each element travels through its own orbit. We live in a system of oddly shaped spheres, bound together, charting a fascinating shared path through space.

An artist's depiction of the solar system.
Antar Dayal/Getty Images
Now That's Amazing
We're discovering new stars all the time, but one of the biggest found so far is called UY Scuti. It's a bright red supergiant about 1,700 times larger than our sun if you measure the amount of space it takes up; but it's not very dense, and only carries about 30 times the sun's mass. 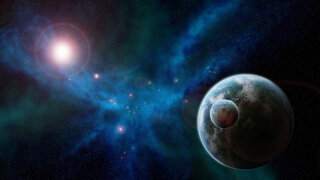