After the Cold War, the world's standing armies began to get smaller. Meanwhile, the nature of warfare was changing. Low-intensity conflict began to replace large-scale wars. In such a conflict, armed force is just one small part of an expansive menu of social, economic and political tools available to engage an enemy.

Accompanying this trend was a dramatic increase in the use of advanced weapon systems. Maintaining these systems became a serious challenge. Soldiers spent more time monitoring weapons and learning how to operate them. With resources already stretched thin, armies were having trouble keeping up. They started looking to private contractors, or private military companies (PMCs), to fill the gaps.

The number of PMCs mushroomed in the 1990s. Generally, they didn't provide combat soldiers but rather civilian contractors to perform any number of noncombat duties, from monitoring advanced weapon systems to rendering technical assistance and logistical support. A few, however, engaged in combat.

The company Sandline International made headlines in 1997 when it sent troops to fight against rebel forces on the island of Bougainville in the South Pacific. And Executive Outcomes led a coup attempt in 2004 to overthrow the government of Equatorial Guinea. Simon Mann, an ex-officer of the British army, ran both of these companies. The media and the international community condemned Mann and his soldiers as mercenaries, and when Mann was captured and arrested in March 2004, both companies folded. 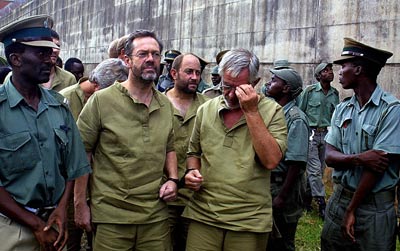 Getty Images
Simon Mann (left, in handcuffs), the leader of the group of 70 mercenaries arrested in Zimbabwe on charges of trying to topple the president of Equatorial Guinea

The private military company wasn't dead, however. If anything, the conflict in Iraq led to an unprecedented proliferation of PMCs and nonmilitary contractors. Today, contractors make up a second, private army that's larger than the entire U.S. military force. The exact number is debatable, but some estimates suggest that more than 180,000 individual contractors of many nationalities work for the U.S. government in Iraq, doing an assortment of jobs that the U.S. has paid more than $100 billion for [source: Risen].

Blackwater Worldwide is probably the most visible PMC operating in Iraq. Headquartered in North Carolina, Blackwater provides most of the security for U.S. embassy personnel in Iraq. Although the security guards are armed, they don't execute offensive operations. In fact, their rules of engagement are very clear: They can use proportionate force only when attacked. But the lines can get blurred easily, as evidenced by the September 2007 shootings involving Blackwater guards. The incident, which Blackwater says was prompted by military aggression against their ranks, left 17 Iraqi civilians dead and 24 wounded. No soldiers were among the casualties. An investigation into the incident revealed that 14 of the shootings were unjustified and broke deadly force rules in effect for security contractors [source: Johnston and Broder].

In light of such events, it's easy to see why many critics would describe private military contractors as mercenaries. And yet a majority of contractors working in Iraq rarely, if ever, engage in any sort of armed combat. So what do they do with their time? That's the topic of the next section.