Life of a Mercenary: Private Security Contractor for a PMC

Private security contractors are employees of a corporation, but they're similar to mercenary soldiers in many respects. For example, private military companies find their employees all over the world, from Russia and Europe to Africa, the Americas and Asia. At Blackwater Worldwide, a PMC based in the United States, some positions are available only to U.S. citizens. Others are open to anyone.

Most contractors have already had another career, either in the military or in law enforcement. British PMCs often hire ex-members of the Special Air Services, or SAS, a special-forces regiment within the British army. It's not unusual to find contractors who were honorably discharged from the service or who have several medals for heroism. Former military personnel and ex-policemen are especially well suited to serve as security guards.

To be considered for a position, a candidate must complete an online application or send a résumé to a company's corporate office. Former military personnel may have to submit a Form DD-214, Report of Separation. This form contains information that will verify a person's military service.

Security contractors may be deployed anywhere in the world and may be used by military forces, government agencies or corporations. Here are some possible assignments:

Contractors are paid well in these assignments. Individual contractors on the ground typically earn about $600 to $700 a day. Some can earn $1,000 a day, depending on qualifications and experience. However, most contractors don't receive any benefits. That means part of their salary must cover federal taxes, including Social Security matching, as well as health care and retirement payments. After these deductions, a contractor's take-home pay may be comparable to someone serving in the military. 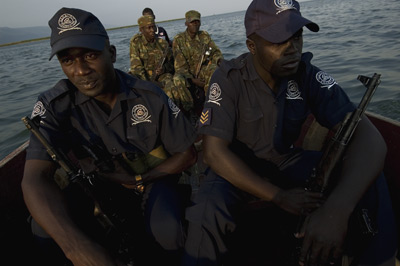 Getty Images
These security contractors are assigned to protect an oil exploration site in Uganda. Africa has long been a place where guns for hire have found work.

Of course, security contractors don't always face the same level of danger as regular army soldiers. That's because they don't conduct offensive missions. Their role is to provide protection and defensive security, and in fulfilling that role, they must abide by rules for the use of force. According to these rules, contractors can defend themselves, the person or asset they've been contracted to protect and any civilians under imminent threat. Even taking a defensive position, contractors can -- and often do -- find themselves in a firefight. Those that fire on civilians or engage troops in an offensive manner face serious repercussions. In fact, contractors who accompany an armed force in the field are subject to all provisions of the Uniform Code of Military Justice, or UCMJ. The UCMJ forms the foundation of U.S. military law and precisely spells out all of the offenses that can result in punishment by court-martial.

In an active combat zone, ambiguity is inevitable. It is this ambiguity that makes security contractors controversial. Next, we'll look at some other risks associated with using mercenaries.