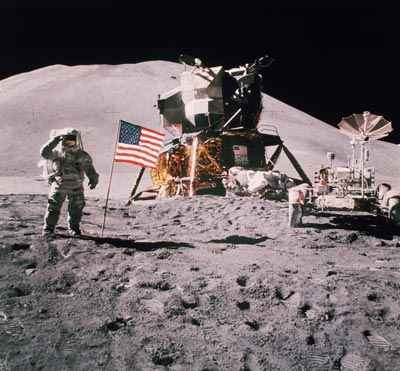 Astronaut James Irwin salutes in front of the landing module of the Apollo 15 on the moon. But why aren't there any stars in the background?
Hulton Archive/Getty Images

So what sort of evidence have conspiracy theorists gathered that might suggest the whole event was a fake? Some 50 years of research has given them some interesting points:

1. There aren't any stars in the background.

One detail doubters often point to is the background of many of the NASA photos. In pictures of the moon's landscapes, there aren't any stars in the sky -- it just looks like a big, black void of space. Since the moon has no atmosphere, shouldn't there be millions of stars dotting the background of these photos? If the landings were faked on a studio stage, did the photographers make a huge mistake and just forget to "turn on" the stars?

Unfortunately for conspiracy theorists, the nature of photography strikes down their argument. The light from the sun hitting the surface of the moon is too bright for any camera to capture something in the distance -- it would wash out any light coming from distant stars in the sky. Even if you were standing on the surface of the moon yourself, you would have to block the landscape from your vision to see any notable points of light. This happens for the same reason that stars are harder to see in big cities than in wide open fields -- there's a lot more light bouncing around from street lamps in the city, so the stars are hidden from view. Your best bet to see the countless numbers of stars in space would be to travel to the dark side of the moon.

One of the most famous photos shows a stray moon rock that appears to have the letter "C" written or stamped on it. This gives off the impression that most of the larger moon rocks seen in pictures from the moon landing are simply props -- a set designer could have labeled this stray moon rock with a letter and accidentally left it turned over for the camera to see.

Scientists and representatives from NASA claim the "C" is just a photographic glitch -- a stray hair that found its way into the developing process -- or a hoax in itself. There's a possibility someone took the original, untouched photo and added the "C" in afterward.

For more conspiracy theories on the moon landing, see the next page.