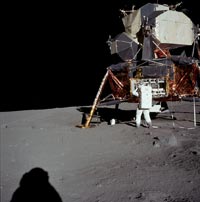 Some people point out that some of the shadows given off by the astronauts are different in length, even though they might be standing close to each other. This might suggest that a faulty lighting system was set up on a stage somewhere, and NASA failed to notice any inconsistencies.

Scientists argue that the photos were taken on rough, hilly landscapes, which are bound to produce all kinds of wacky shadow lengths no matter where you stand. If you take a picture on a snow-covered hill, for instance, the same kind of effect will likely take place.

4. The American flags appear to "flap" in the breeze.

In video footage of the astronauts hoisting up American flags and planting them in the ground, a slight breeze appears to life up the fabric. The moon, however, shouldn't have such types of weather -- there isn't an atmosphere on the moon, so there isn't any air to blow around and ruffle the flags. Was the flag scene filmed in a drafty studio or outside? If it were a hoax, were the filmmakers just too lazy to redo the shot?

The flag was constructed specially for the moon's surface. A taut wire runs through the fabric along its top, allowing it to stand erect like a windswept flag on Earth. Without the wire, the flag would droop like any other flag hanging in space. The astronauts simply cause the flapping themselves by struggling to plant the flagpole into the ground and bumping it around.

A 16mm film frame of astronaut John Young driving around the surface of the moon. Did NASA slow down footage of the moon landings to simulate weightlessness?
Image courtesy NASA

Some have pointed out the possibility that in order to create the effect of weak gravity on the moon, the astronauts were carried by thin wires and filmed jumping around. NASA then slowed down the film, according to the conspiracy theorists, in order to make it look like they were floating through the air. Doubters have gone far enough to construct their own wiring systems, film themselves and slow down the footage to compare it to NASA's video.

Scientists refute this claim because of the dust kicked around by the astronauts as they jump around the moon's surface. If NASA filmed the video on Earth, the dust would gather into clouds because of air in the atmosphere. Instead, the dust is kicked up and falls right back to the ground without collecting or floating around. NASA would have had to build an entire studio and suck all of the air out to create a vacuum, something that would be incredibly difficult even by today's standards.

So are these points enough to prove that the moon landings were just fakes? Dr. David McKay, Chief Scientist for Planetary Science and Exploration at NASA's Johnson Space Center, noted after Fox's conspiracy theory television spot that faking the moon landing and duping thousands of scientists around the world would probably be more difficult than keeping the secrets of the Manhattan Project. And on Sept. 3, 2006, the European Space Agency's (ESA) SMART-1 probe purposefully crash-landed on the surface of the moon -- before it touched down, it was taking images and data from the moon's landscape, including that of previous moon landings. The ESA hasn't released any photos or video, yet, but doubters and believers alike are waiting to see any concrete evidence of past expeditions.

For lots more information on the moon, space and other related material, see the next page.