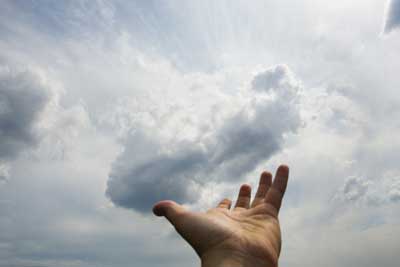 When you raise an outstretched palm to the sky, you're effectively supporting the column of air that extends from your hand to the very edge of space. Your body constantly bears this weight in the form of atmospheric pressure.
Scott Kleinman/Photographer's Choice PR/Getty Images

We've discussed the origins and chemical composition of the air we breathe, so it's time to go ahead and actually enter the Earth's atmosphere. As we slowly slide toward that sphere of swirling clouds, passing the occasional satellite, the obvious question is, "Where does outer space stop and the atmosphere begin?" There's no set boundary between atmosphere and space -- the thin air in the upper atmosphere just eventually thins to nothing at approximately 600 miles (1,000 km) above sea level.

This entire atmosphere sits on Earth's surface, held in place -- like everything else on the plan­et -- by gravity. Despite the phrase "light as air," the atmosphere is anything but, weighing in at a whopping 5.5 quadrillion tons (4.99 quadrillion metric tons). With 14 zeros trailing after it, that's a lot of mass, and it's the driving force behind air pressure.

Imagine a squad of cheerleaders forming a human pyramid. The girls on the bottom row have to bear the weight of all the other girls above them, while the girl on the top doesn't have to bear any of the weight at all. A similar situation exists in the atmosphere. The air is least pressurized at the edge of space, where there's little or nothing pressing down on it. The air at sea level, however, is weighed down by all the air on top of it -- like those poor girls shoring up the pyramid. The pressure also presses the molecules in the lower atmosphere closer together. This means that the higher the air pressure, the greater the air density. For this reason, 50 percent of Earth's air exists below an altitude of 3 miles (5 km).

Standing at sea level, the atmosphere exerts, on average, a pressure of 14.7 pounds (6.7 kg) against every square inch (2.5 cm) of your skin [source: Vogt]. If you venture above sea level, air pressure and its corresponding density will decrease. This is why it's more difficult to breathe at higher altitudes. The molecules of oxygen your lungs require are spaced farther apart, so you have to inhale more air to get what you need.

­Gravity is just one force at work on the atmosphere. The primary mover and shaker is none other than the fiery ball of gas at the center of our solar system.