Evolution of the Atmosphere 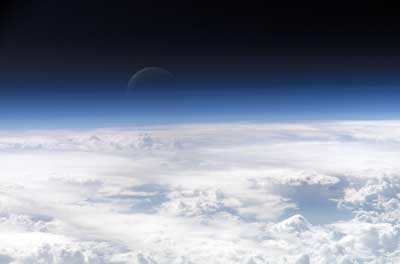 Our planet is little more than a giant ball of liquids, solids and gases. If you think of Earth as an onion, the atmosphere is merely the topmost skin.
Stocktrek Images/Collection Mix: Subjects/Getty Images

Go back about 4.6 billion years and you wouldn't find the Earth. You'd find molecules and particles slowly forming a gaseous mass inside a nebula. Over time, these gases eventually condensed into liquid and solid forms. Some of it cooled to form the continents and oceans, but much of Earth's center still burns with furious heat. The atmosphere sits on the surface of this sphere.

Scientists think Earth's original atmosphere escaped from within the planet, where it formed in the heat of radioactive decay. By today's standards, this air was utterly unbreathable; rich in methane, ammonia, water vapor and neon. There was no free oxygen (O2) at all. You might think this had to change before organisms could evolve on the planet, but it was actually the steady evolution of unicellular organisms that produced oxygen and brought about the change in the atmosphere's makeup. Over hundreds of millions of years, this evolved into the air that fills your lungs today.

Currently, the atmosphere is composed of 78 percent nitrogen, 21 percent oxygen, 0.9 percent argon and 0.03 percent carbon dioxide. The remaining 0.07 percent consists of water vapor, hydrogen, ozone, neon, helium, krypton and xenon [source: Vogt]. Is this the finished recipe for Earth's atmosphere? Probably not, considering that the process of evolution that created it continues to this day. Plus, there's another agent of change to consider: human beings.

While­ some date human influence on global climate back to the industrial revolution of the 1800s, others look back several thousand years to the agricultural revolution. Environmental scientists such as William F. Ruddiman argue that carbon dioxide concentrations began to rise 8,000 years ago due to early slash-and-burn agriculture practices in Asia, India and Europe. To learn more about humanity's role in climate change, read How Global Warming Works.

­So we've covered how the atmosphere developed and what it's made of, but we're still looking at the Earth from the outside. In the next section, we'll move in a little closer and explore the major physical properties at work in it.

If weather is what the atmosphere does, then climate refers to trends in how it does it. The term refers to the average weather conditions for a particular area over a period of years. Given how brief a year is in geologic time, climates are far from set in stone. They've changed in the past and will continue to change in the future.