Can You Feel the Heat? Solar and Terrestrial Radiation 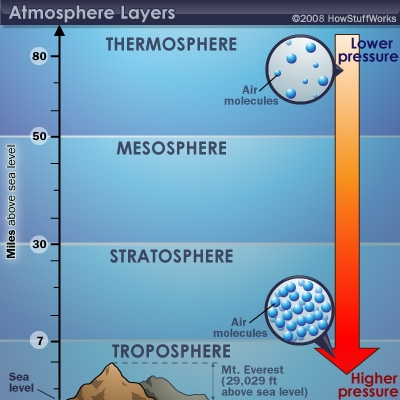 The sun emits a vast amount of energy, which travels across space in the form of short-wave radiation. Only a tiny portion of this power actually reaches the surface. But most of the atmosphere isn't directly heated by solar radiation, but rather by the terrestrial radiation that the planet itself emits.

Ever see a video of someone frying an egg on the pavement on a hot day? It's the heat emitted by the pavement that's doing the frying, not the sun, despite the fact that the pavement was heated by the sun to begin with. Earth's surface absorbs solar radiation and emits terrestrial radiation.

­Why does the air absorb this home-brewed radiation on the rebound instead of the fresh solar energy? Well, a solar-charged Earth emits long-wave radiation. While water vapor and carbon dioxide molecules merely allow the passage of incoming short waves, they absorb Earth's long waves, heating the atmosphere from the ground up. This is why a mountain climber will encounter increasingly colder conditions as he or she ascends, despite effectively moving closer to the sun.

Scientists divide the atmosphere into four layers based on temperature.

Now let's examine how the forces behind air temperature and air pressure affect the weather.