A World of Wind 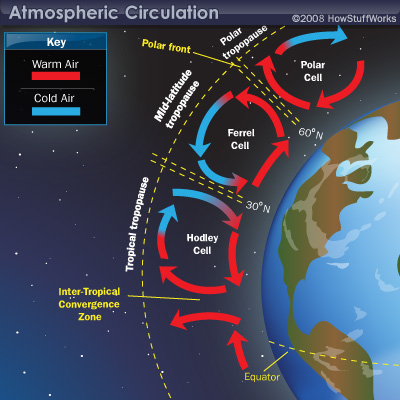 The cycle of rising and falling air demonstrated in last section's city example illustrates a basic convection cell. Convection occurs when mass movement or circulation transfers heat through a substance. A product of changing temperature and pressure, this process is one of the central components of global weather.

Imagine an Earth that doesn't rotate and doesn't experience night. In this example, let's also pretend the sun still heats the areas around the equator the most and the poles the least. This is a lot like our city example, except the entire equatorial belt would be the "city" in this scenario, and the land and sea cooling toward the poles would be the "countryside." This would result in two massive, bowl-shaped convection cells, one for each hemisphere. Surface flows of cool air would sweep toward the equator heating up along the way. Upon arrival, this air would ascend in an updraft. Then it would sweep back toward the poles in a cooling upper air wind.

But of course, our planet does rotate, and when we apply rotation to the hypothetical two-cell model of the world, things get complicated quickly. Besides altering periods of night and day heating and cooling the Earth, you also have three other key factors at work in global atmospheric circulation:

­These three forces dictate the power and direction of Earth's winds. But there are still localized conditions to consider wherever high- and low-pressure areas meet. These can include coastlines, mountains, valleys and areas near volcanic activity.