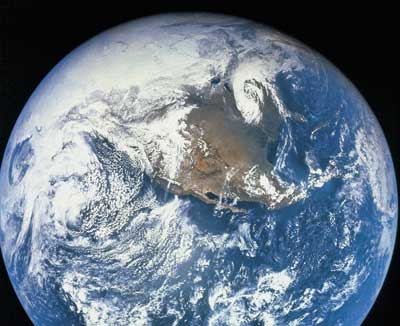 An astronaut's eye view of the Earth is dominated by swirling storm activity.
stockbyte/stockbyte/Getty Images

The troposphere is in constant motion. Air masses race across the oceans and continents, and great rivers of upper-air wind surge overhead. The atmosphere is like a battlefield, thick with the maneuvers of innumerable armies. When these forces clash, the atmosphere gives birth to the terrible beauty of storms.

Often, these storms are what we classify as severe storms. Few other natural occurrences demonstrate the raw and untamed power of nature as well as these powerful atmospheric occurrences.

Thunderstorms form like many other clouds, when a warm, moist air mass rises up and cools, causing the water vapor to condense into clouds. However, if the updraft continues, this cloud mass will continue to grow and rise 40,000 feet (12,000 m) or more up into the troposphere. Large raindrops or ice crystals form in this updraft, but they eventually grow too large and plummet back down, dragging air with them. This creates a powerful downdraft, pouring strong winds out in every direction.

As for the rumbling and crashing you hear during a thunderstorm, that also comes down to a matter of atmospheric pressure and temperature. A flash of lighting typically heats the air around it by a staggering 55,000 degrees Fahrenheit (30,000 degrees Celsius). This causes the molecules in the air to expand so rapidly that the air expands in the form of a shock wave powerful enough to break the sound barrier.

Scientists have more than one theory on how lightning forms. The most popular theory is that the falling rain and ice transfer a positive charge to even colder cloud particles. This creates a positive electric charge in the upper portions of the cloud, a negative charge in the center and a slight positive charge in the lower regions. The ground also has a positive charge. All this built-up electricity has to go somewhere, and if it builds up enough, it can jump across typically non-conductive air to reach positively charged areas within the cloud, in other clouds or on the ground. For a complete explanation of this process, read How Lightning Works.

Between their powerful winds and potentially lethal lightning strikes, severe thunderstorms can present quite a danger on their own. Occasionally, however, they transform into something even more destructive: a tornado. These storms consist of either a powerful single vortex or multiple suction vortices revolving around a tornado's center.

Tornados occur in less than 1 percent of thunderstorms, and scientists still aren't completely sure what triggers their formation. The key component, however, seem to be the powerful updrafts associated with thunderstorms. Scientists estimate that the pressures inside a tornado's vortex can be as much as 10 percent lower than surrounding air pressures. It works along the same lines as a typical updraft (such as the one in our city example), only more extreme. To learn all about tornado activity, read How Tornados Work.

Finally, there's the hurricane. Also known as typhoons and cyclones, these storms are low-pressure zones that spin out of the tropics due to the Coriolis effect, building up speed and growing to enormous size. The low-pressure area sucks in spiraling torrents of surface wind, which then ascend into the sky in a column. A warm-air downdraft fills this hollow column. This unique middle area of relative calm is called the eye of the hurricane. These massive storms boast wind speeds in excess of 74 miles (119 km) per hour and an average diameter of 375 miles (600 km). To learn much more about these powerful storms, read How Hurricanes Work.

Weather affects our lives from day to day. You can feel it on your skin and glimpse its movements in the air outside your home. Yet it's the product of a massive atmospheric system -- 5.5 quadrillion tons (4.99 quadrillion metric tons) of gases stirred to life by one burning star.

­Explore the links below to learn more about weather and the titanic forces that make a simple afternoon shower possible.