Do animals have built-in weather detectors? 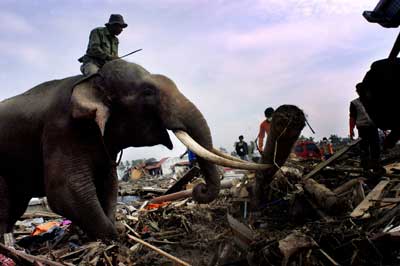 Some elephants seemed to sense the December 2004 tsunami was coming. This elephant named Sadat helped in the clean-up efforts by clearing debris in Banda Aceh, Indonesia.
Charles Pertwee/Getty Images

If your dog always comes inside right before it rains, you may think that animals can predict the weather. It's probably more accurate to say that animals react to certain environmental signals that accompany weather changes, not to the weather itself.

A prevalent opinion is that animals can detect certain events, like earthquakes, as soon as they happen, even if the originating event is a great distance away. While this ability wouldn't make much of a difference to people at the scene of the disaster, it could conceivably assist those located farther from the epicenter. A few researchers even believe animals may be able to sense the precursors to these events before they actually strike. However, hard evidence of this is extremely limited; most of the evidence is anecdotal.

Another detail worth noting is that the majority of researchers do not claim animals have ESP or a sixth sense. What they are saying is that animals make greater use of their existing five senses, especially when compared to humans. Let's take a look at how those five senses can operate differently from ours in certain animals.

The most critical sense is hearing. There are some sounds people can't hear. On the low end of the scale are infrasonics, low-pitched sound vibrations on the hertz frequency scale falling below 20 hertz (Hz). On the other end are high-pitched sounds, like dog whistles, which humans also can't hear. People typically hear in a range between 20 and 20,000 Hz (middle-aged adults usually don't hear beyond 12,000 or 14,000 Hz). Elephants, however, generally hear between 16 and 12,000 Hz. Cattle also start hearing sound at 16 Hz, but can continue to hear all the way to 40,000 Hz. And what sort of elements produce sounds in the infrasonic range? The answer includes earthquake shockwaves and ocean waves. See where this is going?

Some researchers think certain animals, like elephants, get an early earthquake warning because they can sense shockwaves in the ground through their large feet. They don't hear the sound and think, "Oh no, an earthquake is coming." But they do sense distant, unfamiliar vibrations rolling in that terrify them into fleeing for safety.

How animals, not just elephants, sense these vibrations is generally unknown. Researchers are examining different organs, body parts and nerve chains in a variety of species that may be able to pick up sound vibrations that humans just can't sense.

This theory could also account for the just-in-time-reactions of other animals with less acute hearing just prior to the tsunami. Researchers note that infrasonic sound produces uneasiness and nausea in people. Animals may perceive these sound vibrations as dangerous and instinctively seek safety.

So what about less extreme causes? Can birds let you know when a storm is coming? Can the behavior of bears alert you to the severity or duration of cold winter months ahead? Read the next page to find out about other ways animal behavior relates to the weather.