Weather of the Past: Relying on Animals, Plants and Local Lore 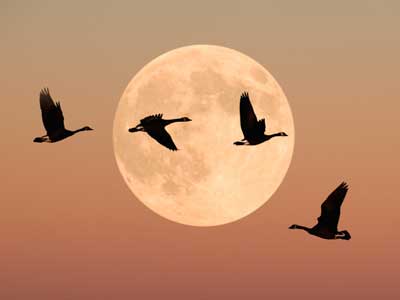 Early humans observed local animals and vegetation to help them determine the weather. Who needs Al Roker when you have migratory birds?
Burazin/Photographer's Choice/Getty Images

Pattern recognition is one of the key properties of intelligence. Your dog knows she'll get a treat if she does a trick because you always feed her after she rolls over. You know your aunt will probably give you pajamas for Christmas because your closet's stuffed with hideous, plaid pajamas. Our minds learn and act based on the patterns we perceive all around us. By knowing what came before, we know what the future will hold.

­Early humans observed patterns in the weather and learned to anticipate changes that affected their food supply and well-being. They created names for the seasons and even forms of calendars to guide their wanderings and, later on, the growing cycles of their crops. People knew what the weather would be based on their own cumulative experiences, as well as those passed onto them by their ancestors. For instance, certain Australian Aboriginal tribes carry with them 18,000 generations worth of local weather observations [source: BBC]. Outside of their territory, their knowledge gradually fizzles out, but their understanding of weather incorporates a great deal of local detail. A tribe may recognize as few as two or as many as six seasons, depending on local precipitation and temperature factors.

Early humans knew that cooling temperatures meant the coming of winter. They knew the sights and smells that preceded a rainstorm. And where their own senses failed them, they turned to those in nature: the life cycles of various vegetation and the migration of other animals. Plus, many animal species are far more attuned to changes in air and water pressure that often signal storms and other atmospheric changes.

Long before humans invented devices to measure these conditions, they simply looked to the skies and fields. Animals recognized subtle patterns in the atmosphere, and we recognized patterns in their responsive behavior. These traditions continue to this day in the pages of The Old Farmer's Almanac and with practices such as Groundhog Day. To learn more about animals and weather, read Can animals predict the weather?

Following the weather in a region or tribal territory is one thing, but charting atmospheric patterns on a global scale is a different undertaking altogether. Over the last few centuries, synoptic meteorology, or the idea of comprehensively charting the weather over a large area, has emerged. By comparing simultaneous weather conditions in adjacent areas, scientists were able to better understand prevailing conditions over a larger area and to provide the kinds of weather maps we view on TV and the Internet every day.

­How do meteorologists record current weather conditions? Read the next page to find out how we go about determining what our weather is doing right now.