Weather of the Present: Barometers, Thermometers and Hygrometers 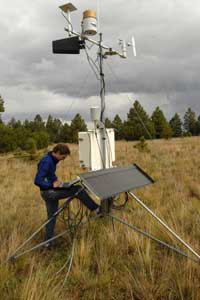 You've probably heard the saying "too many cooks spoil the broth," most likely in reference to an album, business venture or even a sports team. It means that when too many people work on a project, the results are often confusing, lackluster or just plain awful. In a way, the atmosphere is a broth stirred by way too many cooks: gravity, sunlight, rotation, conflicting pressure zones, cool oceans, hot deserts, mountain ranges and colossal air currents, just to name a few. These forces constantly stir the atmosphere to movement, and just figuring out what it's doing at any given second requires a great deal of study and observation.

Three of the key atmospheric properties are air pressure, air temperature and humidity. To really understand what's going on, you have to be able to measure these conditions. For this reason, meteorology didn't really emerge as a science until the 17th-century inventions of the barometer, which measures air pressure, and a reliable thermometer, which gauges temperature. Before the 1600s ended, scientists also developed reliable hygrometers to measure humidity. These instruments, along with rain gauges, allowed for improved agricultural planning and sea travel.

But to gain a truly synoptic view of current weather conditions, you need a way to communicate with other observers in other regions. The 1837 invention of the telegraph made this possible. By the mid-19th century, meteorologists at various weather stations were able to communicate quickly with each other and assemble the big picture.

Toward the end of the 19th century, meteorologists used weather balloons to study the upper atmosphere. In doing so, they made crucial discoveries about upper-air pressure and wind patterns. Through this, meteorologists were able to discover the role low-pressure centers play in the weather. You've probably seen these centers pointed out on a map in weather forecasts. Cooler, denser air spirals into warmer, low-pressure areas from the surrounding regions. This, in turn, pushes the warm air up into the upper atmosphere, where the air spirals out in all directions. These formations are called cyclones (not to be confused with hurricanes and typhoons, which are called cyclones in some regions).

But this elevation of air doesn't just happen at low-pressure centers. It also happens when two air masses meet each other in a front. In either case, elevated air often forms clouds and storm sy­stems. With these discoveries, meteorologists were better prepared to forecast weather. They weren't just making educated guesses based simply on pattern recognition; they were understanding how the atmosphere works.

In the 20th century, advancements in aviation made it possible for us to better study the upper atmosphere, and new radio technology allowed meteorologists to send sensitive equipment up with balloons to high altitudes -- a practice that continues today. Similarly, radio weather buoys communicated back conditions at sea, including water temperature, wind speed and wave height. Following World War II, scientists began using radar to study the weather since the technology made it possible to detect rainfall in addition to aircraft.

In 1960, another advancement added to our ability to observe and measure Earth's atmosphere: the weather satellite. By placing these automated observatories in north-to-south polar orbits and east-to-west geostationary orbits, humans were able to view their atmosphere from the outside and observe storm systems from a truly synoptic vantage point. Weather satellites provide more than just an extraterrestrial view of weather; they also carry sensors to measure temperature, moisture and solar radiation.

­It's one thing to know what's happening now, but how do meteorologists transform all this data into an idea of what tomorrow's weather will bring? Read the next page to find out.