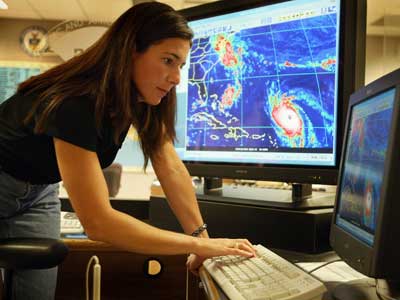 A meteorologist at the National Hurricane Tracking Center in Miami studies the movements of a powerful storm system in an effort to forecast its movements.
Joe Raedle/Getty Images News/­Getty Images

Modern technology allows meteorologists an unprecedented understanding of Earth's atmosphere and an excellent vantage point from which to observe its weather. But how do meteorologists translate this into a reasonable prediction of what the weather will continue to do?

­Instead of simply looking at current conditions and estimating based on past observances, meteorologists create numerical weather prediction (NWP) models. These models are objective, physics-based calculations which, when processed through a computer, predict what current weather will look like in the future. The equations involved in these models are complex and involve multiple atmospheric variables. These variables leave room for error, so the further out meteorologists attempt to forecast, the greater the potential for error becomes.

Look at any hour-by-hour weather forecast: Each hour's forecast is a step into the possible future. An initial forecast (such as what the weather will be an hour from now) is the result of running a computer model based on what the weather is doing now. Then, to run a model of what the weather will be doing in two hours, you apply the various equations to the model that came before it. So while the first forecast was based on actual conditions, the second was based on forecasted conditions that might have been less than accurate. Each subsequent forecast compounds the possibility for error. For this reason, NWP models become increasingly flawed the further ahead you try to look.

Meteorologists have steadily improved NWP models since the 1980s. By constantly tweaking them, they've created more accurate equations with fewer errors. Another technique, called Model Output Statistics, improves weather forecasts by taking the NWP model, which is based on current conditions, and extrapolating it by comparing it to past surface conditions for a particular region. This method essentially uses past weather readings to balance some of the errors inherent in an NWP model.

­Despite continued advancements in meteorology, don't expect a flawless weather forecast anytime soon. When considering the numerous variables in an NWP model, it's important to realize just how much difference even a small discrepancy can make. In 1961, meteorologist and chaos theory founder Edward N. Lorenz took a close look at the drastically different models a difference of a single decimal point could make. Based on these findings, Lorenz coined the term butterfly effect, in which the question is asked, "Does the flap of a butterfly's wings in Brazil set off a tornado in Texas?"

But while forecasting the weather is far from flawless, meteorology has saved countless lives by allowing scientists to predict where destructive weather will strike and warning people ahead of time. Your five-day forecast may not be perfect, but neither is our understanding of the complex array of movements that fill the atmosphere we live in.

Explore the links below to learn more about the weather.