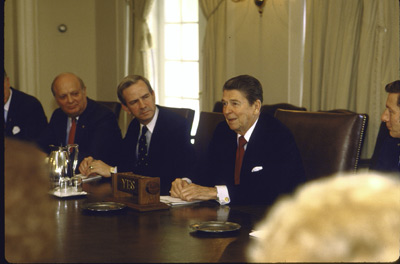 With the election of President Ronald Reagan in 1981, military spending became a top priority for the United States. Cold War rhetoric increased dramatically, as the Soviet Union was referred to as an "evil empire" by Reagan. In 1983, the president proposed a new, extremely expensive space-based anti-ballistic missile system called the Strategic Defense Initiative (SDI). Also known as "Star Wars," the plan hoped to design a complex anti-ballistic missile system that used technology on the ground and satellites in space to defend the U.S. from airborne nuclear attacks.

T­he controversial program was eventually­ abandoned because it was too complicated and expensive -- after the U.S. spent more than $80 billion, barely any progress was made on the "Star Wars" plan, and many critics pointed out that its science-fiction-based name was appropriate for a system that might never come to fruition. Despite this, the Americans were still far ahead of the Soviets in technology and funds, and Mikhail Gorbachev, Russia's leader at the time, was pushing more for peace and restructuring. As Soviet-American relations began to improve by the late '80s, the Soviet economy was on the verge of a collapse. On Nov. 9, the Berlin Wall fell, finally uniting East and West Germany. The wall was a longtime symbol of the tensions between the Soviets and the U.S., and the Cold War effectively ended two years later when the Soviet Union ceased to exist.

The '90s began with a sense of relief and the feeling that the threat of nuclear war had weakened. The Strategic Arms Reduction Treaty (START I) was quickly reintroduced for consideration -- the plan had begun during the Reagan administration, but disagreements led to a standstill on its ratification. Presidents George H.W. Bush and Gorbachev signed the treaty with pens made from melted-down nuclear missiles, as it called for the reduction of nearly 50 percent of each country's nuclear arsenal.­

­Although nations made gradual improvements after the Cold War to­ward disarm­ament, complications continued to emerge during the '90s and into the 21st century. Nations including China and India continued to test weapons on and off despite a general movement toward the end of such acts. Although there are seven nations with an acknowledged arsenal of nuclear weapons - the U.S., Russia, Britain, France, China, India and Pakistan -- other nations are suspected to have nuclear programs or have actively pursued weapons. Israel, Iran, North Korea and Libya are all believed to have extensive knowledge or capabilities of producing nukes, which still manages to cause political tensions and international uncertainty.

For lots more information on nuclear weapons and related topics, see the next page.