Browse the article Are we not the only Earth out there? 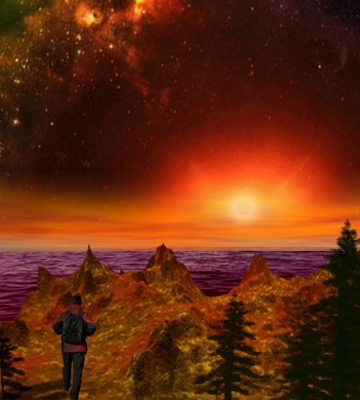 Will that be you someday peering out over Gliese 581g's alien landscape? See more Space Exploration Pictures.
©HowStuffWorks 2012

You stand in a perpetual sunset, beneath an eerie, reddish-orange sky laced with thin clouds. At the edge of a vast sea, solid ground rises slowly from the water, giving way to lowlands covered in vegetation. The plants bask in temperatures reaching 40 degrees Fahrenheit (4 degrees Celsius), but their leaves aren't green -- they're black and spread open wide to absorb the scant energy washing across the landscape.

You've come to this paradise from your permanent home, an outpost located on the dark, frozen side of the planet. You hike down the lowland hills to the water's edge. As you gaze at the horizon, you vow that, next year, you'll bring the whole family so they can enjoy the color and heat and light. Then you realize that next year is just 37 days away, and you feel suddenly small and insignificant in a vast, overwhelming universe.

This could be your future Earth. No, really.

The scene we just described is an artistic interpretation of what Gliese 581g -- a potential Earth-like planet discovered in 2010 -- might be like if we could travel the 20.5 light-years to get to it. Granted, astronomers haven't confirmed its existence, but that hasn't stopped a few from running computer simulations to predict 581g's climate and overall habitability.

The models suggest that this strangely familiar world, which races around red-dwarf Gliese 581 in just 37 days, keeping one face pointed at the star at all times, may be covered in water and may possess an atmosphere containing large amounts of carbon dioxide. If so, a greenhouse effect just might heat the region directly facing the host star, producing an ice-covered planet with a large area of liquid water in the middle that looks like the iris of an eye. This "eyeball Earth" could support life, including photosynthetic organisms with black pigments especially suited to absorb the weak light filtering through the thick atmosphere.

Even if Gliese 581g turns out to be a figment of astronomy's imagination, it stands as a symbol of what could be humanity's greatest triumph: finding a habitable planet outside of our solar system. A few years ago, this seemed a dream of fools and sci-fi fanatics. Now, thanks to advanced planet-hunting techniques and some serious equipment, such as the Kepler space telescope, astronomers are locating thousands of candidate planets outside of our solar system -- what they call exoplanets -- and are coming to a sobering, almost frightening realization: The universe may be filled with billions of planets, some of which most certainly resemble Earth.

Things start to get interesting when astronomers locate an exoplanet sitting pretty in the Goldilocks zone.
©HowStuffWorks.com 2012

If another Earth exists in the universe, wouldn't it need to look like, well, Earth? Sure, but the odds of finding a blue world exactly 7,926 miles (12,756 kilometers) across and tilted on its axis nearly 24 degrees seem about as remote as finding an Elvis Presley impersonator who looks good in sequined leather and can snarl out a tune better than the King himself.

It doesn't hurt to look, of course, and astronomers are doing just that. The idea isn't necessarily to find an exact match, but a close one. For example, astronomers have discovered several so-called "super-Earths" -- planets that are slightly larger than our home. Gliese 581g stands as a perfect example. It's about three times the mass of Earth, which makes it a far better match than planets as large as Jupiter or Saturn.

In fact, behemoths like Jupiter and Saturn are known as gas giants because they're nothing more than giant balls of hydrogen, helium and other gases with little or no solid surface. Gas giants, with their stormy, multicolored atmospheres, may offer spectacular sights, but they'll never make good digs. Smaller planets, including Earth and super-Earth lookalikes, are much more likely to become incubators of life. Astronomers refer to these pipsqueaks as terrestrial planets because they possess heavy-metal cores surrounded by a rocky mantle. Terrestrial planets tend to stick close to their host stars, which means they have smaller orbits and much shorter years.

Terrestrial planets are also more likely to lie in the Goldilocks zone. Also called the habitable zone or life zone, the Goldilocks region is an area of space in which a planet is just the right distance from its home star so that its surface is neither too hot nor too cold. Earth, of course, fills that bill, while Venus roasts in a runaway greenhouse effect and Mars exists as a frozen, arid world. In between, the conditions are just right so that liquid water remains on the surface of the planet without freezing or evaporating out into space. Now the search is on to find another planet in the Goldilocks zone of another solar system. And astronomers have a couple of tricks they're not afraid to use. 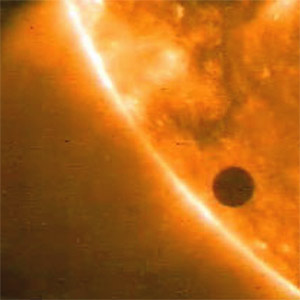 When a planet gets between its host star and Earth, as Venus is doing in this picture, the star's brightness dims. This dimming is pretty handy when it comes to planet hunting.
Photo courtesy NASA/LMSAL

One of the great problems in the search for exoplanets is detecting the darn things. Most are simply too small and too far away to be observed directly. Our Earth-based telescopes can't resolve a faraway planet as a dot separate from its host star. Luckily, astronomers have other means at their disposal, and they all call for sophisticated telescopes armed with photometers (a device that measures light), spectrographs and infrared cameras.

The first method, known as the wobble method, looks for changes in a star's relative velocity caused by the gravitational tug of a nearby planet. These tugs cause the star to surge toward Earth and then away, creating periodic variations that we can detect by analyzing the spectrum of light from the star. As it surges toward Earth, its light waves are compressed, shortening the wavelength and shifting the color to the blue side of the spectrum. As it surges away from Earth, its light waves spread out, increasing the wavelength and shifting the color to the red side of the spectrum. Larger planets intensify the wobble of their parent stars, which is why this technique has been so efficient at finding gas giants several times larger than Earth.

What's one thing that all planets can do well? Block light. If a planet's orbit crosses between its parent star and Earth, it will block some of the light and cause the star to dim. Astronomers call this a transit, and the related planet-hunting technique the transit method. Telescopes equipped with sensitive photometers can easily discern large planets, but they can also catch even the slight dimming caused by an Earth-sized object.

Finally, some astronomers have been turning to a technique known as microlensing. Microlensing occurs when one star passes precisely in front of another star. When this happens, the gravity of the foreground star acts like a magnifying lens and amplifies the brightness of the background star. If a planet orbits the foreground star, its additional gravity intensifies the amplification effect. This handily reveals the planet, which would otherwise be invisible to other detection techniques. 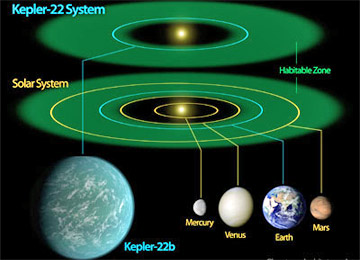 One of NASA's most celebrated programs relies on the transit method to find exoplanets. Since 2009, the Kepler mission's space telescope has been surveying 170,000 stars in a small patch of sky near the constellations Cygnus and Lyra. Its main instrument, a photometer with a field of view of just 12 degrees, can detect stellar dimming caused by planets as small as Earth.

So far, its observations have rocked the scientific community and stirred the imaginations of space geeks everywhere. In all, the mighty Kepler has identified more than 3,000 potential and confirmed planets. Those that have been confirmed could be entries in an atlas of the "Star Wars" galaxy. For example, Kepler-16b is a Saturn-sized planet orbiting two stars, a la Luke Skywalker's home Tatooine. And the Kepler-11 system consists of six planets -- some rocky and some gas giants -- orbiting a single, sunlike star.

The most amazing discoveries, however, occur when astronomers confirm the existence of Earth-like planets, such as the two dubbed Kepler-20e and Kepler-20f. Both are terrestrial planets roughly the same size as our own inner planets. Kepler-20e is slightly smaller than Venus, and 20f is slightly larger than Earth. Unfortunately, neither of these potential Earths lies in the Goldilocks zone -- both are burning-hot ovens -- so they're unlikely to harbor little green men, or even little green microbes. Kepler-22b may be more hospitable. Confirmed in December 2011, 22b is located 600 light-years away and orbits in the Goldilocks zone of a sunlike star. Astronomers believe the planet's radius is more than double that of Earth, but they haven't determined its composition.

Kepler isn't the only effort uncovering a bonanza of awe-inspiring exoplanets though.

Kepler's transit-spotting photometer may have grabbed the headlines throughout 2010 and 2011, but other planet-hunting techniques and teams continue to produce good results. The wobble method, for example, has led to several exciting discoveries. In April 2007, European astronomers used the wobble method to discover, at that point, the most Earth-like planet ever found.

The planet, called Gliese 581c, is 12,000 miles (19, 312 kilometers) in diameter, or not much larger than Earth (8,000-mile diameter). It orbits the same red star as Gliese 581g, but it makes one complete revolution in just 13 Earth-days. This short orbit would make a planet too hot for life, except that Gliese 581's surface temperature is 1/50th that of our sun [source: Than]. As a result, Gliese 581c's surface temperature ranges from an estimated 32 degrees F to 102 degrees F (0 degrees C to 39 degrees C). The research team that discovered it believes it has a developed atmosphere. The planet might not only have water -- it might be entirely covered by oceans.

And in February 2012, an international team of scientists reported the results of their wobble-based research focused on GJ 667C, an M-class dwarf star associated with two other orange dwarfs located about 22 light-years from Earth. The astronomers were actually hoping to learn more about a previously discovered super-Earth (GJ 667Cb) with an orbital period of just 7.2 days, but their observations led to something better -- GJ 667Cc, another super-Earth with an orbital period of 28 days. The new planet, which sits comfortably in the Goldilocks zone of GJ 667C, receives 90 percent of the light that Earth receives [source: Stephens]. Most of this light is in the infrared spectrum, which means the planet likely absorbs a higher percentage of the energy coming to it. The bottom line: GJ 667Cc may absorb the same amount of energy from its star that Earth soaks up from the sun and may, as a result, support liquid water and life as we know it.

At about the same time the GJ 667Cc team was preparing its results, another team from the Space Telescope Science Institute in Baltimore, Md., published results from a massive project known as the PLANET (Probing Lensing Anomalies NETwork) Collaboration. The results, which were based on six years of microlensing observations, may change the face of planet-hunting the same way quantum mechanics changed physics. The study concludes that there are far more Earth-like planets than super-sized gas giants. In fact, according to the study authors, the Milky Way galaxy alone could contain 100 billion planets, 10 billion of which would likely be small, rocky worlds like our inner planets. Approximately 1,500 of these planets could be within 50 light-years of Earth. Now consider that the Milky Way is just one of billions and billions of galaxies flung across the universe. There could be, literally, an infinite number of planets and an almost uncountable number of Earth-like planets.

The question then becomes, Will humans ever stand beneath an alien sunset or walk among black-leafed plants? We certainly hope so.