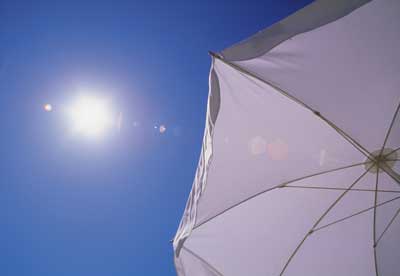 Ultraviolet rays from the sun are a form of radiation.
DAJ/Getty Images

Electromagnetic (EM) radiation is a stream of photons, traveling in waves. The photon is the base particle for all forms of EM radiation. But what's a photon? It's a bundle of energy -- of light -- always in motion. In fact, the amount of energy a photon carries makes it sometimes behave like a wave and sometimes like a particle. Scientists call this wave-particle duality. Low-energy photons (such as radio) behave like waves, while high-energy photons (such as X-rays) behave more like particles. You can read more about how photons work in How Florescent Lamps Work.

EM radiation can travel through empty space. This differentiates it from other types of waves, such as sound, which need a medium to move through. All forms of EM radiation reside on the electromagnetic spectrum, which ranks radiation from lowest energy/longest wavelength to highest energy/shortest wavelength. The higher the energy, the stronger, and therefore more dangerous, the radiation. The only difference between a radio wave and a gamma ray is the energy level of the photons [source: NASA]. Below is the electromagnetic spectrum at a glance.

Radio: Radio waves have the longest wavelength in the electromagnetic spectrum (up to a football field long). They are invisible to our eyes. They bring music to our radios, sound and picture to our televisions, and carry signals to our cell phones. Cell phone waves are shorter than radio waves, but longer than microwaves.

Microwaves: Also invisible, we use microwaves to heat our food quickly. Telecommunications satellites use microwaves to transmit voice through the phone. Microwave energy can penetrate haze, clouds or smoke, and thus is useful for transmitting information. Some microwaves are used for radar, like the Doppler radar your weatherman uses on the news. The entire universe has faint cosmic microwave background radiation -- something scientists connect to the Big Bang Theory.

Infrared: Infrared lies between the visible and invisible portions of the EM spectrum. Your remote control uses infrared light to change the channel. We feel infrared radiation every day via the sun's heat. Infrared photography can detect temperature differences. Snakes can actually detect infrared radiation, which is how they are able to locate warm-blooded prey in total darkness.

Visible: This is the only part of the electromagnetic spectrum we can see. We see the different wavelengths in this band of the spectrum as the colors of the rainbow. The sun, for example, is a natural source of visible waves. When looking at an object, our eyes see the color of light reflected, and all other colors are absorbed.

Ultraviolet: Ultraviolet (UV) rays are what cause us to become sunburned.  Humans can't see UV rays, but some insects can. Our atmosphere's ozone layer blocks most UV rays. However, as our ozone layer depletes due to use of chlorofluorocarbons (CFCs), UV levels are increasing. This can lead to health effects like skin cancer [source: EPA].

X-rays: X-rays are very high-energy light waves. We're most familiar with their use in a doctor's office, but X-rays also naturally occur in space. But don't worry, X-rays can't penetrate from outer space to the Earth's surface. Read more in How X-rays Work.

Gamma rays: Gamma rays have the most energy and shortest wavelength of the entire spectrum. Nuclear explosions and radioactive atoms generate these rays. Gamma rays can kill living cells, and medical professionals sometimes use them to destroy cancerous cells. In deep space, gamma ray bursts occur daily, but their origins are still a mystery.

Read on to find out the difference between non-ionizing and ionizing radiation.

­We know today that overexposure to X-rays is dangerous, and X-ray technicians and patients alike must wear protective gear. However, from the 1930s to 1950s, shoe sales clerks actually used an X-ray machine for shoe fitting. Although there were no reported overexposure injuries to customers, employees weren't so lucky. One shoe model suffered enough complications from X-ray overexposure to require amputation of her entire leg [source: Frame].