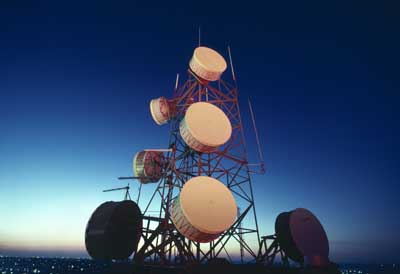 Radiation is broken down into two types: non-ionizing and ionizing. On the electromagnetic (EM) spectrum, this break occurs between infrared and ultraviolet. Drilling down further, ionizing radiation comes in three main types: alpha particles, beta particles and gamma rays. We'll discuss these types of radiation in more detail later in this article.

Extremely low frequency (ELF) radiation is the radiation produced by things like power lines or electrical wiring. There are health concerns associated with magnetic field exposures near power lines, and this issue is very controversial. Obviously, ELF radiation surrounds us every day, but hazardous exposure depends on the strength of the ELF at the source, as well as the distance and duration of exposure. Research on ELF radiation focuses on cancer and reproductive issues. There is no definitive link between ELF radiation and illness, but studies have shown some preliminary connections [source: WHO].

Radio frequency (RF) and microwave (MV) radiation come most commonly from radios, televisions, microwave ovens and cell phones. Both RF and MV waves can interfere with pacemakers, hearing aids and defibrillators, and people should take appropriate precautions. In recent years, concerns about cell phone radiation have made headlines. Although there is no proven link between cell phone usage and health issues, the potential is there. Again, it's all about exposure. Large amounts of RF exposure can heat tissue, which can damage skin or eyes and raise body temperature. Some experts recommend using a headset or hands-free device if you use your cell phone frequently and for long periods [source: FCC]. You can find out more about cell phones and radiation in our article How Cell Phone Radiation Works.

Our skin and eyes absorb infrared radiation (IR) as heat. Overexposure to IR can result in burns and pain. Ultraviolet (UV) radiation overexposure concerns us because there are no immediate symptoms. However, effects can develop quickly afterward in the form of a sunburn or worse. Overexposure to UV radiation can lead to skin cancer, cataracts and a compromised immune system [source: EPA]. Besides sunlight, UV sources include black lights and welding tools.

Lastly, lasers emit IR, visible and UV radiation. They can be quite dangerous to the eyes and skin. People who work with lasers should wear protective gear on the eyes, hands and arms.

In the 1920s, a watch company used the newly discovered substance radium to make its watches glow in the dark. Thousands of girls went to work in the watch factory to do the painstaking painting by hand. To make a finer point on their brushes, the girls would lick them. Sometimes to break up the monotony, the girls would paint their teeth and lips and turn off the lights. Although managers regularly tested the girls for radioactivity, the women never received the results of these tests. In 1938, a worker named Catherine Donahue finally sued the company for the results of her test. She won a settlement of several thousand dollars but died that same year. Many others died over the years, but a link was never proven and the company never took responsibility [source: Irvine].