Time Travel Into the Past 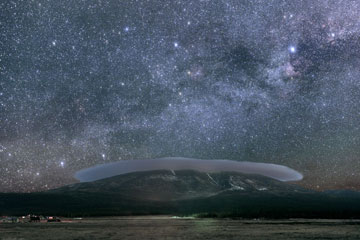 The stars above Flagstaff, Ariz., provide a backward view through time.
Dan and Cindy Duriscoe/FDSC

We've established that time travel into the future happens all the time. Scientists have proven it in experiments, and the idea is a fundamental aspect of Einstein's theory of relativity. You'll make it to the future; it's just a question of how fast the trip will be. But what about travel into the past? A glance into the night sky should supply an answer.

The Milky Way galaxy is roughly 100,000 light-years wide, so light from its more distant stars can take thousands upon thousands of years to reach Earth. Glimpse that light, and you're essentially looking back in time. When astronomers measure the cosmic microwave background radiation, they stare back more than 10 billion years into a primordial cosmic age. But can we do better than this?

There's nothing in Einstein's theory that precludes time travel into the past, but the very premise of pushing a button and going back to yesterday violates the law of causality, or cause and effect. One event happens in our universe, and it leads to yet another in an endless one-way string of events. In every instance, the cause occurs before the effect. Just try to imagine a different reality, say, in which a murder victim dies of his or her gunshot wound before being shot. It violates reality as we know it; thus, many scientists dismiss time travel into the past as an impossibility.

Some scientists have proposed the idea of using faster-than-light travel to journey back in time. After all, if time slows as an object approaches the speed of light, then might exceeding that speed cause time to flow backward? Of course, as an object nears the speed of light, its relativistic mass increases until, at the speed of light, it becomes infinite. Accelerating an infinite mass any faster than that is impossible. Warp speed technology could theoretically cheat the universal speed limit by propelling a bubble of space-time across the universe, but even this would come with colossal, far-future energy costs.

But what if time travel into the past and future depends less on speculative space propulsion technology and more on existing cosmic phenomena? Set a course for the black hole.