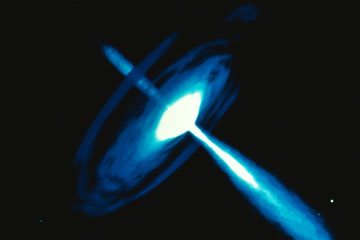 What's on the other side of a black hole?
StockTrek/PhotoDisc/Getty Images

Circle a black hole long enough, and gravitational time dilation will take you into the future. But what would happen if you flew right into the maw of this cosmic titan? Most scientists agree the black hole would probably crush you, but one unique variety of black hole might not: the Kerr black hole or Kerr ring.

In 1963, New Zealand mathematician Roy Kerr proposed the first realistic theory for a rotating black hole. The concept hinges on neutron stars, which are massive collapsed stars the size of Manhattan but with the mass of Earth's sun [source: Kaku]. Kerr postulated that if dying stars collapsed into a rotating ring of neutron stars, their centrifugal force would prevent them from turning into a singularity. Since the black hole wouldn't have a singularity, Kerr believed it would be safe to enter without fear of the infinite gravitational force at its center.

If Kerr black holes exist, scientists speculate that we might pass through them and exit through a white hole. Think of this as the exhaust end of a black hole. Instead of pulling everything into its gravitational force, the white hole would push everything out and away from it -- perhaps into another time or even another universe.

Kerr black holes are purely theoretical, but if they do exist they offer the adventurous time traveler a one-way trip into the past or future. And while a tremendously advanced civilization might develop a means of calibrating such a method of time travel, there's no telling where or when a "wild" Kerr black hole might leave you.