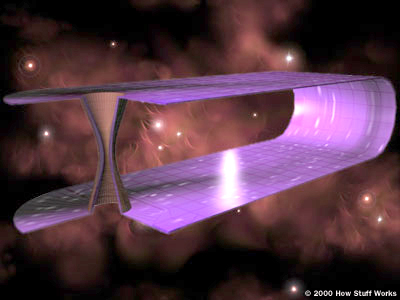 Imagine space as a curved two-dimensional plane. Wormholes like this could form when two masses apply enough force on space-time to create a tunnel connecting distant points.

Theoretical Kerr black holes aren't the only possible cosmic shortcut to the past or future. As made popular by everything from "Star Trek: Deep Space Nine" to "Donnie Darko," there's also the equally theoretical Einstein-Rosen bridge to consider. But of course you know this better as a wormhole.

Einstein's general theory of relativity allows for the existence of wormholes since it states that any mass curves space-time. To understand this curvature, think about two people holding a bedsheet up and stretching it tight. If one person were to place a baseball on the bedsheet, the weight of the baseball would roll to the middle of the sheet and cause the sheet to curve at that point. Now, if a marble were placed on the edge of the same bedsheet it would travel toward the baseball because of the curve.

In this simplified example, space is depicted as a two-dimensional plane rather than a four-dimensional one. Imagine that this sheet is folded over, leaving a space between the top and bottom. Placing the baseball on the top side will cause a curvature to form. If an equal mass were placed on the bottom part of the sheet at a point that corresponds with the location of the baseball on the top, the second mass would eventually meet with the baseball. This is similar to how wormholes might develop.

In space, masses that place pressure on different parts of the universe could combine eventually to create a kind of tunnel. This tunnel would, in theory, join two separate times and allow passage between them. Of course, it's also possible that some unforeseen physical or quantum property prevents such a wormhole from occurring. And even if they do exist, they may be incredibly unstable.

According to astrophysicist Stephen Hawking, wormholes may exist in quantum foam, the smallest environment in the universe. Here, tiny tunnels constantly blink in and out of existence, momentarily linking separate places and time like an ever-changing game of "Chutes and Ladders."

Wormholes such as these might prove too small and too brief for human time travel, but might we one day learn to capture, stabilize and enlarge them? Certainly, says Hawking, provided you're prepared for some feedback. If we were to artificially prolong the life of a tunnel through folded space-time, a radiation feedback loop might occur, destroying the time tunnel in the same way audio feedback can wreck a speaker.