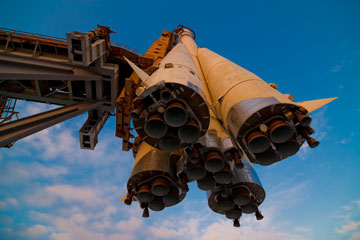 The right cosmic anomaly could turn any spaceship into a time machine.
Hemera/ThinkStock

We've blown through black holes and wormholes, but there's yet another possible means of time traveling via theoretic cosmic phenomena. For this scheme, we turn to physicist J. Richard Gott, who introduced the idea of cosmic string back in 1991. As the name suggests, these are stringlike objects that some scientists believe were formed in the early universe.

These strings may weave throughout the entire universe, thinner than an atom and under immense pressure. Naturally, this means they'd pack quite a gravitational pull on anything that passes near them, enabling objects attached to a cosmic string to travel at incredible speeds and benefit from time dilation. By pulling two cosmic strings close together or stretching one string close to a black hole, it might be possible to warp space-time enough to create what's called a closed timelike curve.

Using the gravity produced by the two cosmic strings (or the string and black hole), a spaceship theoretically could propel itself into the past. To do this, it would loop around the cosmic strings.

Quantum strings are highly speculative, however. Gott himself said that in order to travel back in time even one year, it would take a loop of string that contained half the mass-energy of an entire galaxy. In other words, you'd have to split half the atoms in the galaxy to power your time machine. And, as with any time machine, you couldn't go back farther than the point at which the time machine was created.

Oh yes, and then there are the time paradoxes.