What are some practical uses for solar energy? 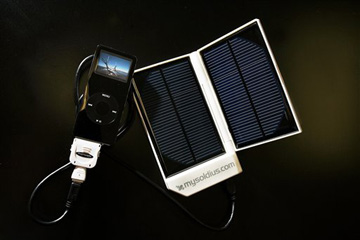 Sunlight is a great source of energy -- if you're a typical plant. Plants use the energy from sunlight to create sugars. The energy from photons becomes chemical energy. Animals eat plants -- or eat animals that in turn eat plants -- and in this way most living things on Earth get their energy.

Converting sunlight into electricity has been a challenging problem for decades. Scientists first discovered the connection between sunlight and electricity in the 19th century. But those early photovoltaics, the fancy name for solar cells, were inefficient. They converted less than 1 percent of the energy they received from the sun into electricity.

After decades of research and engineering, we can now build solar cells that are more than 30 percent efficient. That has opened up opportunities to use solar energy in applications that wouldn't have been possible a few years ago. But just because something is possible doesn't make it practical. And solar panels are still relatively expensive compared to other ways to generate electricity. Some applications just aren't practical from a financial perspective.

Take cars, for example. A solar-powered car would be a useful tool. Imagine never having to pull up to a gas pump or plug into an electrical socket. The energy you needed would be free, courtesy of the sun. But cars are heavy and they need a lot of energy to move. Solar-powered cars tend to be lightweight, single-rider vehicles. They're flat and wide to maximize surface area. They aren't very fast and they have a limited range -- they won't go far in cloudy conditions or after it gets dark. So while it's possible to power a car with the sun it's still not practical.

That doesn't mean solar power is useless or that we should abandon it. There are several applications that make sense. Some require a hefty investment up front but have the potential to pay off financially in the long run. And there's no denying that solar power is more environmentally friendly than systems that emit greenhouse gases.

Up next, let's look at ways you can use solar energy.

How is solar energy useful in your daily life?

Solar power hasn't quite crept into the average lifestyle yet. But that doesn't mean you can't benefit from it. There are many ways you can leverage solar power in your daily life.

Several companies now offer solar-powered recharge stations that let you use the sun to power your portable electronics. Some are small enough to fit in your pocket and can only generate enough electricity to recharge smaller devices like cell phones. Others are much larger and can provide electricity to power-hungry electronics like laptop computers. With these devices, you can recharge your devices in an environmentally friendly way and in places where you can't access electricity otherwise.

But why stop with portable electronics? If you really want solar power to make a big impact on your daily life, you can invest in converting your home to get its energy from solar panels. This really only applies to people who own their home and it requires a significant amount of money up front. Some places have government programs that provide tax incentives to citizens who install solar panels on their homes. If you have the desire -- and the cash -- to make the leap, you can use solar panels to generate enough electricity to meet most of your needs. If you've taken steps to conserve energy in your home you may even be able to sell some excess energy back to the power grid!

You may benefit from solar energy without even being aware of it. Many businesses generate some of the electricity they need through solar power. From enormous utility companies to small business, solar energy is playing an important role in producing electricity.

Have you performed a search using Google recently? The search engine company has invested heavily in green technology, including solar power. Google installed one of the largest solar panel installations in the United States in 2007 [source: Google]. Besides solar power, Google has also invested in wind and hydro power to help provide electricity to the company's massive data centers.

Most Common Uses of Solar Energy

Perhaps the most popular use of solar energy is one that doesn't involve technology at all: drying wet things. People around the world depend upon the sun to dry everything from laundry to crops. It's an effective way to achieve a goal without relying upon electricity.

It may seem unusual, but solar power has become a popular way to provide power to lighting systems that activate after the sun goes down. From street lights to garden lamps, solar power provides the energy needed to illuminate the darkness late into the night. These lights contain batteries that charge during the day as sunlight hits the solar cells. At night, a photoresistor detects the absence of light and a circuit board triggers the batteries to discharge and provide power to LED lights, which are efficient and bright.

You can find devices running on solar power in remote places. Several regions use solar panels to generate power for devices like emergency phone systems on the side of roads and transportation signals. These devices usually have battery packs in addition to solar panels so that they work even after darkness falls. Like the solar-powered lighting systems, the cells can provide the electricity needed to recharge the battery packs each day.

Solar power may also lead to you getting a speeding ticket. Some speed cameras along roads rely on solar power during the day. So if you're caught on camera speeding, you may want to shake your fist at the sun for the fine you'll have to pay. The alternative is to obey the speed limit in the first place.

One common use of solar technology is out of sight unless you have access to a powerful telescope. Many satellites use solar panels to generate power. Engineers will often mount solar panels on arms that can rotate so that the panels always find the best angle to receive as much sunlight as possible.

Solar power comes in handy in remote locations on Earth as well. Research centers in Antarctica use solar panels during the months when that part of the world receives constant sunlight throughout day and night. When the earth's tilt moves Antarctica into perpetual night, the facilities depend upon wind turbines to generate power.

As solar panel efficiency increases and the cost of manufacturing the photovoltaic cells falls, it's likely that we'll see many more applications of solar power across the globe. Maybe one day a better question to answer will be "what doesn't get its energy from the sun?"

Learn more about solar power and related topics by following the links on the next page.

In 1976, electronics manufacturer Sharp introduced the world's first solar-powered calculator called the EL-8026. Sharp covered the back of the calculator with solar cells to provide the power the calculator needed. Today, you can find dozens of different calculators that draw power from light with just a couple of small solar cells.