by Laurie L. Dove
Prev NEXT
5 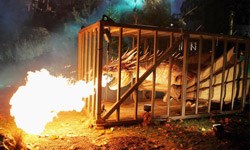 Guests at the 2005 world premiere of the "Harry Potter and the Goblet of Fire" film in London included a life-sized, fire-breathing Norwegian Ridgeback mechanical puppet.
Dave Hogan/Stringer/Getty Images Entertainment

Like most freshly hatched babies, Norbert the dragon was an adorable little thing. This fictional dragon, part of the also imaginary Norwegian Ridgeback lineage, played an integral role in "Harry Potter and the Philosopher's Stone" by J.K. Rowling. Half-giant and school groundskeeper Rubeus Hagrid kept Norbert as a pet, although the young dragon grew with alarming rapidity and randomly belched fire. Hagrid found this charming enough, but there was one pressing problem: It was illegal to harbor dragons. Eventually, he sent Norbert to live out his days in a dragon sanctuary in Romania, where another issue cropped up: Norbert is actually a Norberta. Dragon expert Charlie Weasley said he could tell because female Ridgebacks are much more violent [source: Rowling].