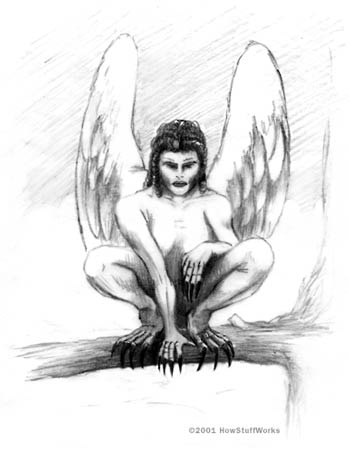 Lamastu and Lilith are often depicted with wings and sharp talons.

Nobody knows when people came up with the first vampiric figures, but the legends date back at least 4,000 years, to the ancient Assyrians and Babylonians of Mesopotamia. Mesopotamians feared Lamastu (also spelled Lamashtu), a vicious demon goddess who preyed on humans. In Assyrian legend, Lamastu, the daughter of sky god Anu, would creep into a house at night and steal or kill babies, either in their cribs or in the womb. Believers attributed sudden infant death syndrome and miscarriage to this figure.

Lamastu, which translates to "she who erases," would also prey on adults, sucking blood from young men and bringing disease, sterility and nightmares. She is often depicted with wings and birdlike talons, and sometimes with the head of a lion. To protect themselves from Lamastu, pregnant women would wear amulets depicting Pazuzu, another evil god who once defeated the demoness.

Lamastu is closely associated with Lilith, a prominent figure in some Jewish texts. Accounts of Lilith vary considerably, but in the most notable versions of the story, she was the original woman. God created both Adam and Lilith from the Earth, but there was soon trouble between them. Lilith refused to take a subservient position to Adam, since she came from the same place he did.

In one ancient version of the legend, Lilith left Eden and began birthing her own children. God sent three angels to bring her back, and when she refused, they promised they would kill 100 of her children every day until she returned. Lilith in turn vowed to destroy human children.

Accounts of Lilith as a child-killer seem to be taken directly from the Lamastu legend. She is often described as a winged demoness with sharp talons, who came in the night, primarily to steal away infants and fetuses. Most likely, the Jews assimilated the figure of Lamastu into their tradition, but it's also possible that both myths were inspired by a third figure.

While she is often depicted as a terrifying creature, Lilith also had seductive qualities. The ancient Jews believed she would come to men at night as a succubus.

Legends of bloodsucking creatures are present in many cultures around the world. One vampire-like creature with a considerable amount of notoriety in Central and South America is , literally translated as "the goat sucker." Click here to learn more about this modern monster.