What if we had two suns? 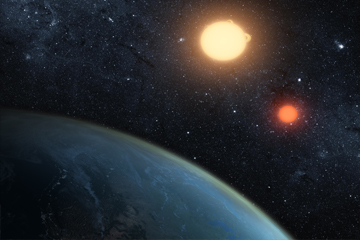 Two suns might make for a great suntan, but the length of our days and nights would be really wacky.
NASA/Sebastain Kaulitzki/Science Photo Library/Corbis/D. Fagan

"A long time ago in a galaxy far, far away" isn't just the opening of a Star Wars movie anymore. Astronomers have discovered planets that orbit two (and in some cases more than two) suns, making sunsets, such as the one that occurs on Luke Skywalker's home planet, Tatooine, a beautiful, double-orbed event every day.

With the discovery of these circumbinary planets — the scientific term for a planet that orbits two stars — scientists have begun to speculate about what Earth would be like if we had two suns. In fact, one scientist has even suggested that we already live in a solar system with two stars — the biggie we see in the sky on cloudless days and a smaller, dwarf star companion called Nemesis, though this theory is not widely accepted [source: Space].

For our purposes, we'll assume that we don't have a second sun named Nemesis in our solar system because if we did, this question would already be answered. So pull up a lounge chair, grab a glass of sweet tea and enjoy the thought of those romantic double sunsets — because the rest of the story isn't nearly as pretty.

Kepler-16b is the first circumbinary planet to be discovered. Astronomers say it's extremely cold on 16b, so if you're planning to enjoy that sunset, you might want to grab a parka. If Earth had developed similarly to Kepler-16b — around two dimmer stars, rather than around our one bright sun — we'd be even colder than 16b's minus 100 degrees Fahrenheit (minus 73 degrees Celsius). All water on our planet would be frozen, and no life would have formed thanks, also, in part to Earth being farther from the sun than 16b is to its star system [source: Wolchover].

Other scientists suggest that day and night would have completely different meanings on an Earth with two suns. When both suns were up, days would be much brighter. Nights would be different too because the suns would sometimes set at different times [source: Warren].

Still others suggest that the number of eclipses would increase as one sun moved in front of the other, maybe as often as once a week or so. And depending on the axis of rotation of our Earth in relation to these two suns, the seasons might change much more rapidly [source: Choi].

Sounds like an Earth with two suns wouldn't be nearly as livable as Tatooine — even without the Sand People. So, if you need a double sun fix, your best bet is probably to enjoy the Star Wars series one more time.