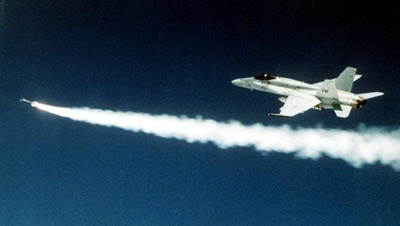 All of the expensive technology that goes into a fighter jet, attack helicopter or bomber wouldn't be much use on the battlefield without any ordnance. While they're not as expensive or complex as the military vehicles that carry them, guns, missiles and bombs are the end technology that finally gets the job done in combat. And most of today's missiles and bombs are pretty impressive aircraft in their own right. Smart weapons don't just sail through the air; they actually find their own way to the target.

In this article, we'll look at one of the oldest and most successful smart weapons in the U.S. arsenal, the legendary AIM-9 Sidewinder missile. As we'll see, the small and simple Sidewinder is a highly effective combination of electronics and explosive power, brought together with incredible technical ingenuity. 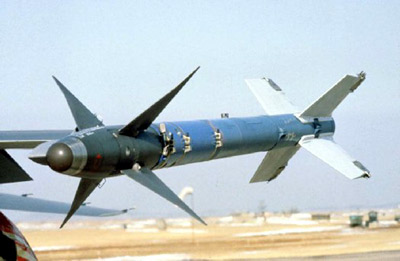 The Sidewinder AIM-9 (air intercept missile 9) is classified as a short-range, air-to-air missile. Simply put, its job is to launch from an airborne aircraft and "kill" an enemy aircraft (damage it to the point that it goes down). Missiles like the Sidewinder are called smart weapons because they have built-in seeking systems that let them home in on a target.

The technology of smart weapons really got going in the decade following World War II. Most early guided weapon prototypes were built around radar technology, which proved to be expensive and problematic. These missiles had their own radar sensors, but obviously could not carry their own radar transmitters. For the guidance system to lock on an enemy plane, some remote radar system had to "illuminate" the target by bouncing radar beams off of it. In most cases, this meant the pilot had to keep the aircraft in a vulnerable position after firing in order to keep a radar lock on the enemy until the missile could find it. Additionally, the radar equipment in the missile was large and expensive, which made for a high-cost, bulky weapon. Most of these missiles had something around a 90 percent failure rate (nine shots out of 10 missed their targets).

In the next section, we'll see how this failure rate was addressed in the building of a new targeting system. 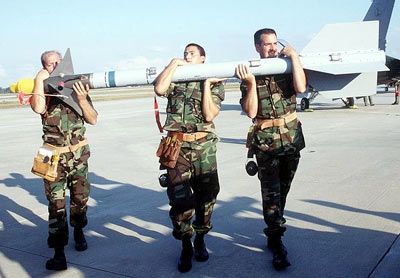 In 1947, a Naval physicist named Bill McLean took it upon himself to build a better system -- a missile that would seek out the heat from an enemy aircraft's engine system. Since the missile would home in on the target's own emitted energy, rather than reflected radio energy, the pilot could "fire and forget" -- that is, he could launch the missile and get clear. In place of the bulky radar equipment, the missile would use a relatively small heat-sensing photovoltaic cell to "see" the target. This meant it could be built much smaller than the current radar prototypes, and at a much lower cost.

Officially, the Navy had no interest in non-radar guidance systems, but at the China Lake, California, Naval Ordnance Test Station (NOTS) where McLean was employed, researchers had enough freedom to pursue unconventional projects. Under the guise of missile fuze development, McLean and his colleagues worked out the design of the first Sidewinder prototypes. Six years later, in September 1953, the missile had its first successful test run.

Since that time, the Sidewinder has taken a number of different forms, each model adding new technology and capabilities (check out F-16.net: AIM-9 Sidewinder for details on the specific models). While today's semiconductor guidance systems are a lot more advanced than the vacuum tubes on the original designs, the overall operation is pretty close. In the next couple of sections, we'll examine the current Sidewinder model, the AIM-9M, and also take a peek at its upcoming replacement, the AIM-9X. 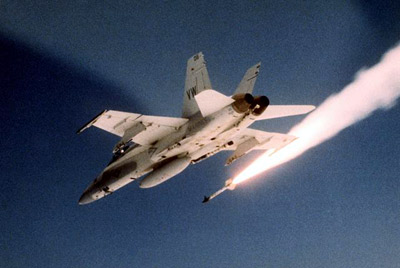 As we saw in the last section, the central idea of the Sidewinder system is to home in on the heat, or infrared energy, from an enemy aircraft (from the engine exhaust or from the hot fuselage itself). Essentially, the missile's job is to keep flying toward the infrared energy until it reaches the target. Then the missile blows up, destroying the enemy aircraft.

To do all of this, the Sidewinder needs nine major components:

To see how all these pieces work together, let's examine a typical attack sequence.

Securing a Sidewinder to the missile launcher on an F-15 Eagle
Photo courtesy U.S. Department of Defense

Each of the four rear wings, which provide the necessary lift to keep the missile flying, is outfitted with a simple stabilizing device called a rolleron. Basically, a rolleron is a metal wheel with notches cut into it. As the missile speeds through the air, the air current spins the rolleron like a pinwheel.

The rollerons on the rear wings help stabilize the missile in flight.
Photo courtesy U.S. Department of Defense

If you've read How Gyroscopes Work, you know that a spinning wheel resists lateral forces acting on it. In this case, the gyroscopic motion counteracts the missile's tendency to roll -- to rotate about its central axis. The simple, cheap rollerons steady the missile as it zips through the air, which keeps the seeker assembly from spinning at top speed. This makes it a lot easier to track the target, as we'll see in the next section. 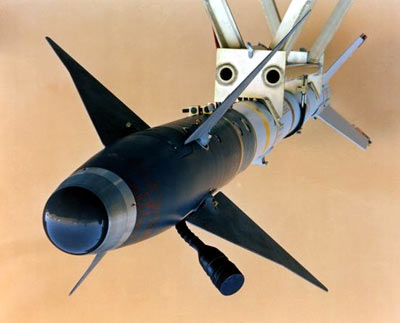 The Sidewinder seeker is something like the CCD in a video camera. It has an array of sensors that generate an electrical signal when exposed to the infrared light given off by hot objects. Since it only sees things in terms of "very hot" and "not very hot," the infrared system is much simpler than a visible-light detection system (an ordinary video camera). Additionally, infrared seekers don't need an outside light source, so they work perfectly well night or day.

In the current Sidewinder models, the infrared sensor array is coupled with a conical scanning system. The basic idea of a conical scanning system is to continually move the feed horn -- the assembly of lenses and mirrors that directs light to the sensor -- around in a small circle (to visualize this, imagine holding the eraser end of a pencil steady in one hand while moving the pointed end around in a circle). As a whole, the moving feedhorn scans a large section of the sky. The guidance control system figures out where the target is based on fluctuations in the detected infrared light as the feed horn moves around the circle. If the target is to the left of the missile, for example, the sensor will detect greater infrared light when the feed horn is aimed to the left than when it is aimed to the right.

In the next section, you'll find out more about the guidance control system. 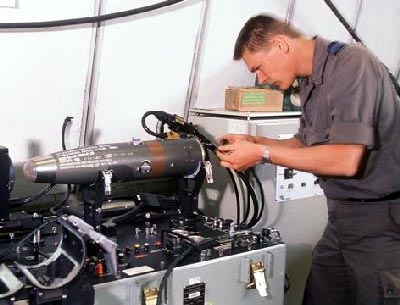 The guidance control system's main goal is to keep the infrared image of the enemy aircraft roughly centered so that the missile nose continues to point toward the target. If the infrared image moves off center, the control system sends a signal to the servo assembly. The servo assembly includes a gas generator that feeds high-pressure gas to pneumatic pistons. The pistons are connected to rocker arms, which move the fins back and forth. The command signal from guidance control activates electric solenoids, which open and close valves leading to these pistons in order to tilt the fins from side to side.

To compensate for the target's own motion, the control system uses a strategy called proportional navigation. The basic idea of this approach is to over-compensate course corrections. The control system evaluates how far off center the target is, and adjusts its angle of flight proportionally, based on a multiplier. If the multiplier were 2, for example, and the missile were 10 degrees off course, the missile would change its flight direction by 20 degrees. Then, a tenth of a second later it would re-evaluate its heading, and adjust the fins again.

By over-correcting in this way, the control system anticipates the path of the moving target, in much the same way a quarterback throws a ball just ahead of a running receiver, anticipating where the receiver will be when the ball actually arrives.

In the next section, we'll find out what happens next, when the missile reaches its target. 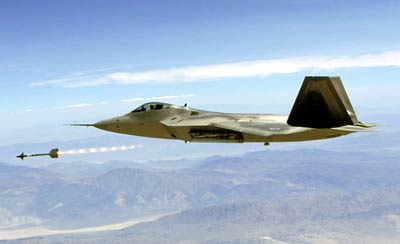 The detector consists of eight laser-emitter diodes and eight light-sensor diodes arranged around the outside of the missile airframe, just behind the flight fins. When the Sidewinder is in flight, the detector is constantly emitting laser beams in a spoke pattern around the missile. If the missile gets close enough to the target, the laser beams will reflect off the aircraft body and bounce back to the sensor diodes. The control system recognizes that the missile is right next to the target and triggers the warhead. 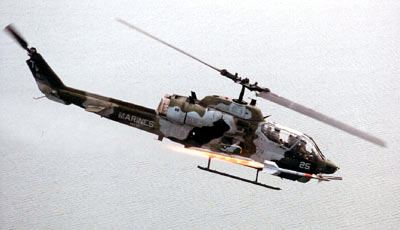 The powerful explosive force from this expanding gas blasts the titanium rods outward, breaking them apart to form thousands of metal pieces, all zipping through the air at top speed. If the warhead goes off within range of the target, the speeding titanium fragments will break apart the enemy aircraft's fuselage. In some cases, the missile may go right up the target's tailpipe, demolishing the aircraft from the inside. The WDU-17/B is referred to as an annular blast fragmentation warhead because the explosive force carries the metal fragments outward in all directions, in an annular, or ring-shaped, pattern. 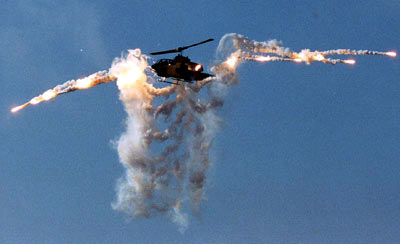 A Cobra attack helicopter releases a flare salvo in training exercises. Flares generate extreme heat away from the aircraft to divert Sidewinders and other heat-seeking missiles.
Photo courtesy U.S. Navy

While the end explosive effect of the newer AIM-9X is pretty much the same as the current AIM-9M, the newer missile has a couple of important modifications that improve its chances of finding the target in the first place. An upgraded seeker design expands the seeker system's view, so it can locate targets well off boresight (in other words, targets that aren't right in front of the plane that's launching the missile).

These modifications, as well as an improved guidance system and other technological additions, will update the Sidewinder so it stays competitive with new aircraft, ordnance and countermeasure technology. After half a century of active service, the Sidewinder should remain one of the dominate missile systems in the world for years to come.

For much more information about the Sidewinder and other missile technologies, check out the links on the next page.