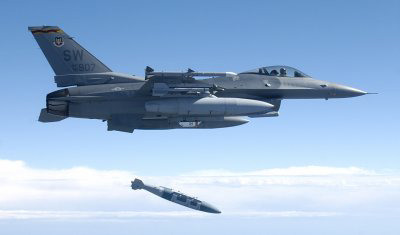 In the air, the JDAM's GPS receiver processes signals from GPS satellites to keep track of its own position. As with other smart bombs, the control system adjusts the flight fins to "steer" the bomb in the right direction. According to the U.S. Air Force, the system is accurate to within 40 feet (13 meters). When everything goes exactly right, the bombs generally hit within a few feet of their targets.

This system works fine even in bad weather, because the JDAM gets all its information from satellite signals, which aren't blocked by cloud cover or obstacles. The bomb doesn't have to see anything at all to find its way to the target. And at around $20,000 per tail kit (which can be added to an existing warhead), it's much more economical than $120,000+ laser-guided bombs.

The JDAM played a major role in the U.S. invasion of Afghanistan in 2001, and it will certainly play a significant role in any U.S. bombing campaigns in the near future. While the newest smart bombs aren't 100 percent accurate, they are such an improvement over their predecessors that they're quickly taking over the U.S. arsenal.

For more information about smart bombs and other types of ordnance, check out the links in the next section.