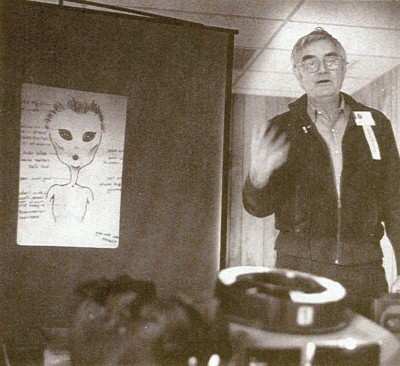 At around 2:45 A.M. on January 12, 1975, George O'Barski was driving home through North Hudson Park, New Jersey, just across the Hudson River from Manhattan, when static filled his radio. Leaning forward to fiddle with the dial, he noticed a light to his left. A quick glance, followed by an astonished stare, revealed its source: a dark, round object with vertical, brilliantly lit windows. It was heading in the same direction as the car and emitted a humming sound.

O'Barski slowed down for a better view. The UFO entered a playing field and hovered a few feet off the ground. A panel opened between two windows, and a ladder emerged. Seconds later about ten identically clad little figures -- they wore white one-piece outfits with hoods or helmets that obscured their facial features -- came down the ladder. Each figure dug a hole in the soil with a spoonlike device and dumped the contents into a bag each carried. The figures then rushed back into the ship, which took off toward the north. The entire incident had lasted less than four minutes.

Months later O'Barski confided the story to a long-time customer and acquaintance, Budd Hopkins, who was interested in UFOs. Hopkins and two fellow investigators subsequently found independent witnesses who verified the presence of a brightly lit UFO in the park at the time of O'Barski's sighting, although only O'Barski was close enough to see the little figures. One witness, a doorman at an apartment complex bordering the park, said that as he watched the object, he heard a high-pitched vibration, and the lobby window broke just as the UFO departed.