Project Sign's "Estimate of the Situation" 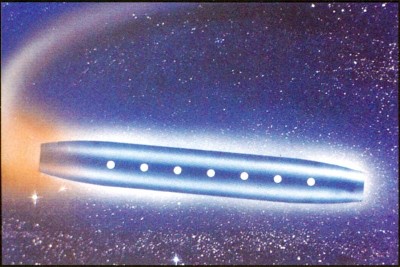 By late July 1948 Project Sign investigators had come to an incredible conclusion: Visitors from outer space had arrived. They had begun with suspicions. Now they now had the proof. The proof was . . . well, it depends on which of two versions of the story is to be believed.

In the better-known version, the proof arrived in the sky southwest of Montgomery, Alabama, at 2:45 A.M. on July 24, 1948. To Clarence S. Chiles and John B. Whitted, pilot and copilot respectively of an Eastern Airlines DC-3, the object at first looked like a distant jet aircraft to their right and just above them. But it was moving awfully fast. Seconds later, as it streaked past them, they saw something that Whitted thought looked like "one of those fantastic Flash Gordon rocket ships in the funny papers." It was a huge, tube-shaped structure, its fuselage three times the circumference of a B-29 bomber, and with two rows of square windows emanating white light. It was, Chiles would remember, "powered by some jet or other type of power shooting flame from the rear some 50 feet." The object was also glimpsed by the one passenger who was not sleeping. After it passed the DC-3, it shot up 500 feet and was lost in the clouds at 6,000 feet altitude.

Although Chiles and Whitted didn't know it at the time, an hour earlier a ground-maintenance crewman at Robins AFB, Georgia, had seen the same or an identical object. On July 20, observers in The Hague, the Netherlands, watched a comparable craft move swiftly through the clouds.

It took investigators little time to establish that no earthly missile or aircraft could have been responsible for these sightings. Moreover, with independent verification of the object's appearance and performance, there seemed no question of the witnesses' being mistaken about what they had seen. In the days following the sighting, Project Sign prepared an "estimate of the situation" -- a thick document stamped TOP SECRET -- that argued that this and other reliably observed UFOs could only be otherworldly vehicles. But when the estimate landed on the desk of Air Force Chief of Staff Gen. Hoyt S. Vandenberg, he promptly rejected it on the grounds that the report had not proved its case.