The Condon Report on UFOs 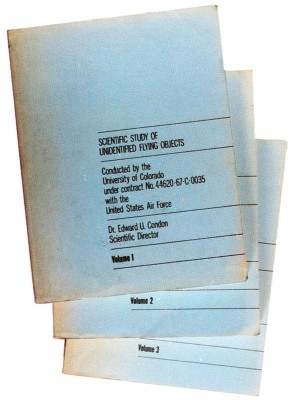 The official text of the controversial Condon Report, billed in J969 as the last (and negative) word on UFOs.
Mary Evans Picture Library

In 1966 the Air Force sponsored a project, directed by University of Colorado physicist Edward U. Condon, to conduct what was billed as an "independent" study. In fact it was part of an elaborate scheme to allow the Air Force, publicly anyway, to get out of the UFO business.­

­The Condon committee was to review or reinvestigate Project Blue Book data and decide if further inve­stigation was warranted. As an internal memorandum leaked to Look magazine in 1968 showed, Condon and his chief assistant knew before they started that they were to reach negative conclusions.

Condon sparked a fire storm of controversy when he summarily dismissed two investigators who, not having gotten the message, returned from the field with positive findings. In January 1969, when the committee's final report was released in book form, readers who did not get past Condon's introduction were led to believe that "further extensive study of UFOs probably cannot be justified on the expectation that science will be advanced thereby." Those who bothered to read the book found that fully one-third of the cases examined remained unexplained, and scientist-critics would later note that even some of the "explained" reports were unconvincingly accounted for.

But that did not matter; Condon arid his committee had done their job, and the Air Force closed down Project Blue Book at the end of the year.

Some years later a revealing memo came to light through the Freedom of Information Act. It amounted to confirmation of a long-standing suspicion: Project Blue Book served as a front for a classified project that handled the truly sensitive reports. The memo, prepared on October 20, 1969, by Brig. Gen. C. H. Bolender, the Air Force's Deputy Director of Development, noted that "reports of UFOs which could affect national security should continue to be handled through the standard Air Force procedure designed for this purpose." He did not explain what this "standard Air Force procedure" was, and the 16 pages attached to his memo -- which presumably would have shed some light on this curious assertion -- are missing from the Air Force files.

The Bolender memo was the first whiff from the cover-up's smoking gun. There would be more --a lot more -- in the years to come.

In the 1950s the Air Force's most forceful critic, retired Marine Corps Maj. Donald E. Keyhoe, caused Pentagon UFO debunkers no end of consternation. A respected aviation journalist, Keyhoe wrote an explosive article, "The Flying Saucers Are Real," for the widely read men's magazine True (January 1950 issue). Not only did intelligent beings from elsewhere have the Earth under scrutiny, Keyhoe claimed, but the Air Force knew it and was conspiring to cover up the truth. From his Washington contacts Keyhoe gathered leaked information about encounters between military interceptor aircraft and fast-moving discs as well as documents suggesting concern about these events.

In 1957, after writing three best-selling books on the UFO cover-up, Keyhoe became director of the National Investigations Committee on Aerial Phenomena (NICAP). Though Keyhoe had powerful allies, including former CIA chief R. H. Hillenkoetter, the Air Force had him out-gunned. Keyhoe retired from the fray in 1969. When he died 19 years later, the battle against official secrecy had passed to other, younger hands. His pioneering efforts are still remembered.