UFO Rumors and the Government 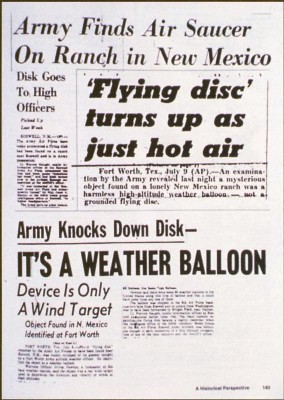 Government authorities explained away the wreckage of a mysterious aircraft discovered near Corona, New Mexico, in 1947 as the remains of a weather balloon, but those who participated in the recovery now admit that this was false.
Jerome Clark

In 1954, after President Dwight Eisenhower dropped out of sight while visiting California (sparking a press-wire report that he had died), it was alleged that he had taken a secret trip to Edwards Air Force Base (AFB) to view alien remains -- or, as another version had it, to confer with living aliens. A soldier with the Air Force confided that in 1948 he and other soldiers were dispatched to a New Mexico site to dismantle a nearly intact craft, from which an earlier party had removed the bodies of little men.

In Europe it was said that the Norwegian military found a saucer on a remote North Atlantic island of Spitsbergën, or maybe it was the German military and the island was Heligoland. On May 23, 1955, newspaper columnist Dorothy Kilgallen wrote, "British scientists and airmen after examining the wreckage of one mysterious flying ship are convinced that these strange aerial objects are not optical illusions or Soviet inventions but are actual flying saucers which originate on another planet."

Over Chesapeake Bay on the evening of July 14, 1952, the pilot and copilot of a Pan American DC-3 had a much-publicized encounter with eight plate-shaped UFOs. The next morning, as they waited to be interviewed separately by Air Force officers, the two agreed to ask about the crash rumors. Subsequently, the copilot, William Fortenberry, raised the question, and one of the interrogators replied, "Yes, it is true." Pilot William Nash forgot to ask until afterward, when he and Fortenberry met together with the officers.

Nash recalled, "They all opened their mouths to answer the question, whereupon Maj. [John H.] Sharpe looked at them, not me, and said very quickly, 'NO!' It appeared as if he were telling them to shut up rather than addressing the answer to me." Later Nash met a New York radio newsperson who claimed the Air Force had briefed him and two other reporters (one from Life magazine) about its recovery of a crashed UFO.