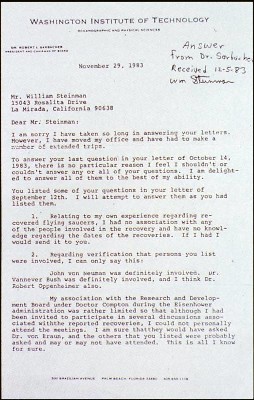 A memo written by Canadian government engineer Wilbert Smith concerning the September 1950 meeting with Sarbacher surfaced three decades later. This led ufologists to Sarbacher for answers. In answer to an inquirer, Sarbacher passed on what he remembered hearing about UFOs during his tenure s a scientific advisor to the Defense Department.
Jerome Clark

A remarkable interview occurred in Washington, D.C., on September 15, 1950, but the content did not leak out until the early 1980s, when Canadian ufologist Arthur Bray found a memo by one of the participants, radio engineer Wilbert B. Smith of Canada's Department of Transport. The memo described a conversation with physicist Robert I. Sarbacher, a consultant with the U.S. Department of Defense Research and Development Board (RDB), at one of the regular meetings Sarbacher and other government scientists conducted with their Canadian counterparts.

Asked about the crash rumors, Sarbacher said they were "substantially correct." He said UFOs "exist. . . . We have not been able to duplicate their performance. . . . All we know is, we didn't make them, and it's pretty certain they didn't originate on the Earth." The issue was so sensitive that "it is classified two points higher even than the H-bomb. In fact it is the most highly classified subject in the U.S. government at the present time." Sarbacher refused to say more.

Smith, who died in 1961, mounted a small, short-lived UFO investigation, Project Magnet, for his government. Through official channels he tried unsuccessfully to learn more than Sarbacher's cryptic remarks had revealed. After the memo surfaced, ufologists found a listing for Sarbacher in Who's Who in America, citing his impressive scientific, business, and educational credentials.

When interviewed, Sarbacher said he had not personally participated in the UFO project, though he knew those who had, including RDB head Vannevar Bush, John von Neumann, and J. Robert Oppenheimer -- three of America's top scientists in the 1940s and 1950s. He had read documents related to the project and on occasion had been invited to participate in Air Force briefings.

"There were reports that instruments or people operating these machines were also of very light weight, sufficient to withstand the tremendous deceleration and acceleration associated with their machinery," Sarbacher told an inquirer in 1983. "I remember in talking with some of the people at the office that I got the impression these 'aliens' were constructed like certain insects we have observed on Earth, wherein because of the low mass the inertial forces involved in operating of these instruments would be quite low. I still do not know why the high order of classification has been given and why the denial of the existence of these devices." Sarbacher could not recall where the crashes had taken place, but he did remember hearing of "extremely light and very tough" materials recovered from them.

Sarbacher's story never varied, and he resisted the temptation to elaborate or speculate. All who interviewed him were impressed. Still, his story could not be verified, since the persons he named were all dead. Sarbacher himself died in the summer of 1986.