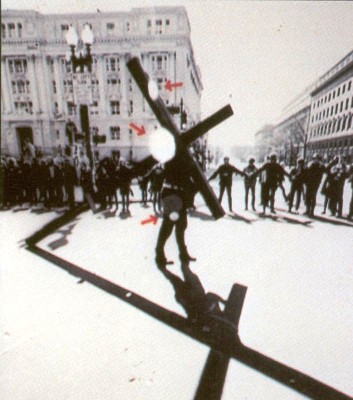 ­This is one of many photographs in which a lens flare, sometimes mistaken for a UFO, appears.
Intercontinental U.F.O. Galactic Spacecraft Research and Analytic Network Archives

Flying saucers were supposed to be a fad. Pundits tied these strange shapes in the sky to "war nerves," a sort of delayed-response reaction to the traumas of World War II. They were also supposed to be a peculiarly American delusion. Unidentified flying objects, however, have survived longer than war memories and remain an eerie, discomforting presence the world over.

As military and civilian researchers scrambled to make sense of all this, anything seemed possible -- even attack by hostile aliens.

On J­anuary 7, 1948, Kentucky Air National Guard Capt. Thomas F. Mantell, Jr., died when his F-51 crashed after chasing what he called, in one of his last radio transmissions, "a metallic object of tremendous size." The official Air Force line was that Mantell saw Venus. Unofficially, many officers feared that a space-ship had shot down Mantell's plane with a frighteningly superior extraterrestrial weapon.

Neither answer, it turned out, was correct. Declassified documents eventually disclosed that the Navy had been conducting secret balloon experiments as part of its Skyhook project, which sought to measure radiation levels in the upper atmosphere. As Mantell pursued what he apparently thought was a spaceship, he had foolishly ascended to 25,000 feet -- a dangerous altitude for the aircraft he was piloting -- and blacked out from lack of oxygen. His F-51 spun out of control and crash-landed in the front lawn of a farmhouse near Franklin, Kentucky. But in the days that followed the tragedy, sensational headlines fueled everyone's worst fears about flying saucers, and the Mantell incident entered UFO legend.