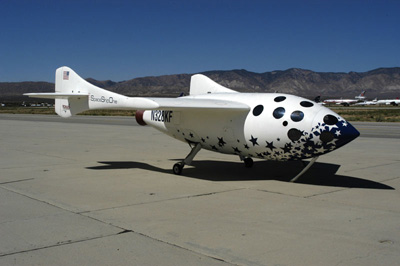 While White Knight is an impressive aircraft, there is no doubt who is the star of the show: SpaceShipOne.

According to SpaceShipOne: Riding a White Knight to Space:

SpaceShipOne ... is designed to reenter like a stable shuttlecock, then glide and land like an airplane. The wings, with an ultralow aspect ratio of 1.7, span 16.4 ft [~5 m]. Their size is based on the requirement to provide enough lift to rotate the vehicle into its ascent attitude after horizontal launch, and to permit conventional gliding approaches and landings. At the top of the climb, the rear part of the wing and the tailbooms -- still known collectively as the "feather" -- hinge upwards. As the spacecraft starts to reenter the atmosphere, the feather stabilizes it in a flat attitude with the slab-like wings at right angles to the airflow.

This creates so much drag in relation to the vehicle's weight (without fuel) that peak heating is moderate. SpaceShipOne is constructed from conventional graphite-epoxy composite materials, with some limited use of high-temperature epoxies. Hotter sections are protected by a simple "trowel-on" ablative thermal protection layer. In the worst case envisaged by the test team, the fuselage may be damaged but the occupants will be unharmed.

SpaceShipOne launches vertically into space from high in the atmosphere. Once it reaches the top of the arc created by its rocket boost, it loses momentum and falls back to Earth. To slow its descent, SpaceShipOne transforms into a configuration that exposes the greatest surface area to the air flow. This creates tremendous drag and slows the ship down as it falls.

That is just the tip of the iceberg as far as innovation built into SpaceShipOne.

In the next section, we'll discuss the unique rocket motor that throws SpaceShipOne into space.