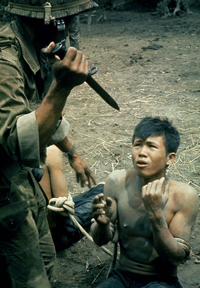 A Vietnamese paratrooper threatens a suspected Viet Cong soldier with a bayonet during an interrogation in 1962.
Larry Burrows/Time Life Pictures/Getty Images

The 1950s appear to have been a time when the CIA put a tremendous amount of energy into perfecting the science of torture. The CIA conducted covert experiments, at times on unsuspecting Americans, using LSD in the search of a “truth serum” [source: The New York Times]. It used electrical currents to inflict pain [source: The Boston Globe]. The agency conducted trials investigating the effects of sensory deprivation [source: The Washington Post]. The CIA found that the best methods for extracting information from detainees come not through the infliction of physical pain or torture, but through psychological torture.

Although the brand of torture the CIA devised through more than a decade of trial and error may not inflict physical pain, it can still do some real damage. Historian and expert on the subject of the CIA and torture, Alfred McCoy, writes, “Although seemingly less brutal, no-touch torture leaves deep psychological scars. The victims often need treatment to recover from trauma far more crippling than physical pain” [source: The Boston Globe].

There is indeed a torture manual and the CIA literally wrote it. In 1963, the Agency created the KUBARK Counterintelligence Interrogation manual. It was, as Alfred McCoy puts it, the “codification” of everything the CIA had learned from its experiments throughout the 50s. In the KUBARK (the codename for the CIA in the Vietnam War [source: The Washington Post]) manual, methods for breaking detainees are based generally on psychology. Identifying a victim’s sense of self and then stripping it away is part of the first step toward breaking him or her. An introverted or shy detainee might be kept naked and perhaps sexually humiliated, for example. Clothes may also be taken simply to alienate the detainee and make him or her less comfortable.

Creating a sense of unfamiliarity, disorientation and isolation seems to be the hallmarks of psychologically undermining a detainee in the purview of the KUBARK manual. Practices like starvation, keeping inmates in small, windowless cells with unchanging artificial light and forcing inmates to sit or stand in uncomfortable positions (stress positions) for long periods of time have been decried or banned outright by the United States government. Yet these techniques are part of the regimen prescribed by KUBARK. So, too, are using hypnosis and drugs to extract information.

While it doesn’t mention electric shock directly, the manual calls for interrogators to be sure that a potential safe house to be used for torture has access to electricity. As one source told The Baltimore Sun, “The CIA has acknowledged privately and informally in the past that this referred to the application of electric shocks to interrogation suspects” [source: The Baltimore Sun].

Physical pain, however, is ultimately deemed counterproductive by the manual. It’s a much worse experience, the guidebook concludes, for an inmate to fear that pain may be coming than to actually experience it. The old adage that anticipation is worse than the experience appears to also have a basis in the shadowy field of torture.

A newer book, largely a revision of the KUBARK manual, draws the same foundational conclusion -- that psychological torment is paramount to physical abuse. The Human Resource Exploitation Manual -- 1983 was first publicized as the result of an investigative report into the human rights abuses in Honduras. Read about the CIA’s torture manual version 2.0 on the next page.