Torture Manuals for the Ages 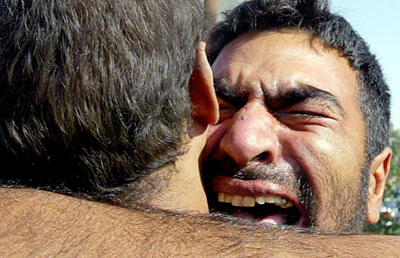 An Iraqi man hugs his brother in November 2005 after being freed from Abu Ghraib prison, a site where some prisoners were tied up, hooded and sexually degraded by the American military.
Ahmad al-Rubaye/AFP/Getty Images

By the time Sun reporters obtained a copy of the 1983 manual in the mid-1990s, Congress had already held hearings on possible CIA torture abuses. Through these inquiries, new standards for the treatment of detainees emerged. What used to be considered fair play in interrogation by the CIA -- like lengthy confinement in small cells, sleep deprivation and prolonged stress -- had been deemed unethical and illegal by Congress. The Sun reporters discovered the 1983 manual had been altered by hand after the Congressional hearings of the late '80s. "Those alterations and new instructions appear in the documents obtained by The Sun, support the conclusion that methods taught in earlier versions were illegal" [source: The Baltimore Sun].

The United Nations (U.N.), too, tightened restrictions against torture. The U.N. Convention Against Torture was ratified by 25 countries in the spring of 1985 (the United States did not sign the treaty). It contains a broad definition of torture, defining it as "any act by which severe pain or suffering, whether physical or mental, is intentionally inflicted on a person for such purposes as obtaining from him or a third person information or a confession" [source: U.N.].

Prior to the U.N.'s treaty, international law had already clearly established that behaviors like humiliation and degradation were out of bounds. The Geneva Convention banned treatment such as this of prisoners in the context of war after it was ratified in October 1950 [source: U.N. Office of the High Commissioner for Human Rights].

Both CIA interrogation manuals suggest techniques considered torture by international law. And, when juxtaposed against the known facts about the activities of the Honduran Battalion 316 squad, as well as squad members' testimony, it appears the CIA was using interrogation techniques outlined in the manuals. Just as striking is the comparison to the KUBARK and 1983 manuals to the treatment of detainees during the Iraq war. Although Congress clearly rebuked the CIA's methods of interrogation as described by the KUBARK and 1983 manuals, as well as via testimony by members of Battalion 316, it became clear the CIA was still using interrogation techniques outlined in the manuals. As proof, photos of prisoners at Abu Ghraib and reports of prisoners at the Army detention center at Guantanamo Bay, Cuba emerged in the early 21st century.

At Abu Ghraib prison in Iraq, photos of naked prisoners tied up, hooded and sexually degraded surfaced in 2004 [source: Salon]. That same year, allegations surfaced that prisoners at Guantanamo Bay detention facility were kept in stress positions for long periods, naked, threatened with dogs and given minimal food and water [source: The Washington Post]. And in 2005, news broke that the CIA had secret prisons in countries in Europe, Asia and Africa, where high-value terror suspects were subjected to "enhanced interrogation techniques," which include physical abuse [source: ABC News].

Following these reports, members of Congress held hearings on the use of torture by the CIA and the U.S. military, just as their counterparts had in the late 1980s. In 2007 and 2008, hearings were held on the legality of water boarding, a method of interrogation which simulates drowning. Congress' view of the technique may have little effect on a CIA decision to discontinue its use, if history is any guide.

Reports of the treatment of detainees at Abu Ghraib and Guantanamo, as well as the existence of secret prisons, point out that, with the CIA, it appears old habits die hard. Either that, or the agency has no techniques for extracting information that are more effective than those which first appeared in the KUBARK manual.