by John Fuller
Prev NEXT
6 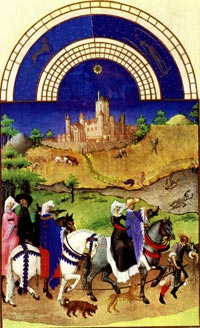 In the background of this painting is the Tour Guinette, from which Desforges dropped in his gondola.
Courtesy Christus Rex, Inc.

Although the Abbé Pierre Desforges, a French clergyman born around the year 1723, surrounded himself with a bi­t of controversy during his lifetime -- in 1758, he was imprisoned in the Bastille for almost a year because of a treatise he wrote stating that Catholic priests and bishops should be allowed to marry -- authorities mostly saw him as a harmless yet stubborn eccentric. During his time in prison, Desforges found the time to study the mating habits of swallows, and it was this endeavor that most likely led to his future obsession with the mechanics of flight.

In 1770, the Abbé constructed a pair of wings, but Desforges wasn't confident enough to try them out himself. Instead, he attached the wings to the nearest peasant and covered him from head to toe in feathers. Leading him up to the top of a belfry, Desforges proceeded to instruct the peasant to start flapping and throw himself into the air, assuring him the wings would work. Desforges gave up after the peasant outright refused to commit suicide, and set to work on gathering funds to build a more reliable flying contraption.

After two years of hard work, Desforges eventually unveiled his flying machine, a six-foot (1.8-meter) long gondola covered by a canopy and attached with wings, the latter of which had a wingspan of nearly 20 feet (6.1 meters). The Abbé sought the help of four more peasants to carry the flying gondola up to the top of the Tour Guinette, a lookout tower near his church. This time Desforges was the one flying, as he most likely assumed that word had spread among the peasants to look out for any clergyman seeking aid near heights. In front of a large crowd, the peasants pushed Desforges over the edge, whereupon he promptly fell straight to the ground. The churchman suffered no more than a broken arm, but onlooker Baron von Grimm noted that although Desforges wouldn't be burned as a sorcerer, "the idea of the gondola would be likely to lead him straight to the madhouse."

Read the next page for a slightly more successful yet equally strange design, also from France.