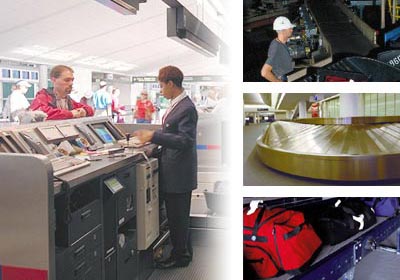 The baggage handling system at an airport plays a crucial role in keeping travelers happy. It also can make the difference in an airport's ability to attract or keep a major airline hub ("an airport that serves as a central connecting point through which many flights of a particular airline are routed" -- Webster's New World Dictionary).

Each airport has its own requirements. For instance, the time allotted for a bag to make it from the check-in area to the gate is determined by how fast a passenger can make the same trip. In some airports, it might only be a short walk to the passenger terminal, while in others, passengers might have to take a train.

The Denver International Airport has a modern, automated baggage-handling system designed by BAE Automated Systems, Inc. (In June, 2003 G & T Conveyor Company, Inc. acquired BAE) United Airlines uses Terminal B at the Denver Airport as a hub, so this terminal has the most automation. This system incorporates some amazing technology to move bags from the check-in counter to the departure gate in an almost completely automated way:

In this article, we'll work our way through the baggage-handling system at Denver International, focusing on the United Airlines terminal. We'll start with an overview.

Special thanks to BAE Automated Systems, Inc. (BAE is now part of G & T Conveyor Company, Inc.), who designed and built the baggage-handling system at Denver International Airport, for their help with this article. 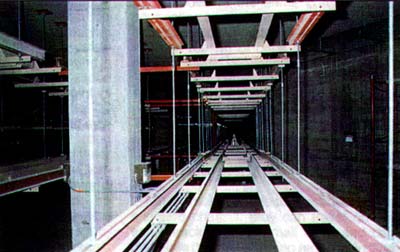 The DCV highway goes through a tunnel from the check-in area to the passenger terminals.
Photo courtesy BAE Automated Systems, Inc.

Unlike a road system, however, a baggage-handling system makes all of the decisions about where a bag is going. Hundreds of computers keep track of the location of every bag, every traveler's itinerary and the schedules of all the planes. Computers control the conveyor junctions and switches in the DCV tracks to make sure each bag ends up exactly where it needs to go.

The process begins when you check in and hand your bag to the agent. 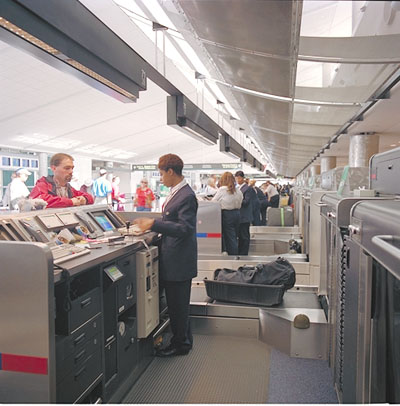 At the ticket counter, a bar-coded tag is affixed to each piece of luggage before it is sent down a conveyer.
Photo courtesy BAE Automated Systems, Inc.

When you check in, the agent pulls up your itinerary on the computer and prints out one or more tags to attach to each of your pieces of luggage. The tag has all of your flight information on it, including your destination and any stopover cities, as well as a bar code that contains a ten-digit number.

This number is unique to your luggage. All of the computers in the baggage-handling system can use this number to look up your itinerary.

Your bag's first stop (after check-in) is at an automated bar-code scanner. This station is actually an array of bar-code scanners arranged 360 degrees around the conveyor, including underneath. This device is able to scan the bar codes on about 90 percent of the bags that pass by. The rest of the bags are routed to another conveyor to be manually scanned.

Once the baggage-handling system has read the 10-digit bar-code number, it knows where your bag is at all times.

Conveyors take each bag to the appropriate destination. For example, it routes bags headed out of the country through X-ray machines and other security devices. 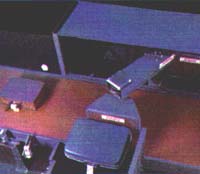 The conveyors in the main terminal of the Denver airport comprise a huge network. There are hundreds of different conveyors with junctions connecting all of them. The conveyor system has to sort all of the bags from all of the different airlines and send them to DCVs that are headed to the proper terminal.

Once your bag has been scanned, the baggage-handling system tracks its movement. At any time, it knows exactly where your bag is on the conveyor system. When your bag comes to a junction, a machine called a pusher either lets it pass or pushes it onto another conveyor.

Through this network of conveyors and junctions, your bag can be sent to nearly any destination automatically.

The last step in the main-terminal conveyor system is a conveyor that loads your bag into a passing DCV. This step is the equivalent of a highway on-ramp.

Next, let's take a look at the DCVs. 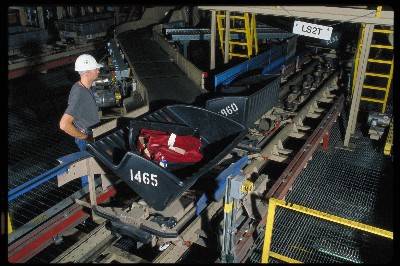 In this photo, you can see one DCV in the flat position for loading and another with the tub tilted backward. The blue rail tilts the tub backward.
Photo courtesy Denver International Airport

The job of the destination-coded vehicle (DCV) is to move your bag quickly to an off-ramp at the gate. DCVs are used at the Denver airport because the distance from the main terminal to the passenger terminals is quite long, and passengers make the commute fairly quickly by train.

What is a DCV?

The DCV is a metal cart with wheels on the bottom and a plastic tub on top. Its only electronic device is a passive radio-frequency circuit that broadcasts a unique number identifying that particular car. This is similar to the circuit inside anti-shoplifting devices.

How is a DCV Propelled?

The DCV rides on a metal track, like a roller coaster. It is propelled by linear induction motors mounted to the track. Unlike most electric motors, a linear induction motor has no moving parts. It uses electromagnets to build two magnetic fields -- one on the track and one on the bottom of the DCV -- that are attracted to each other. The motor moves the magnetic field on the track, pulling the DCV along behind it at a high rate of speed. The main advantages of this system are its speed, efficiency, durability, precision and manageability.

A metal plate that hangs down from the bottom of the DCV rides between the linear induction motors. The motors are located about every 50 feet (15 m). Each time a DCV passes through one of the motors, it receives a boost from the motor that allows it to maintain speed while it coasts to the next motor on the track.

How Does a DCV Load?

The tub on the DCV is mounted on a pivot. Most of the time, the tub is tilted backward so that the bags cannot slide out (remember that DCVs can go around turns at almost 20 mph/32 kph). A linkage on the DCV locks the tub in this position.

When the DCV comes into a loading area, a bar on the track rises and engages a lever on the DCV. This lever tilts the tub into a flat position.

At the moment when an empty DCV is in front of the loading conveyor, your bag leaves the end of the conveyor belt and slides into the tub. This happens without the DCV stopping, so very precise timing is needed. The conveyors have optical pickups so they know exactly where your bag is and can make sure it hits the DCV perfectly each time.

Once your bag is loaded into the DCV, a rail on the track tilts the tub backward.

How Does a DCV Unload?

Unloading a DCV is a similar process. A mechanism on the track engages a lever on the DCV that causes the tub to tilt downward and dump your bag onto a section of conveyor that runs alongside the track.

The DCVs unload in one smooth motion as they move past the unload conveyer. After your bag has been deposited, a bar on the track raises the tub back into the tilted position.

By this point, your bag is very close to the plane. Let's take a look at how it completes its journey. 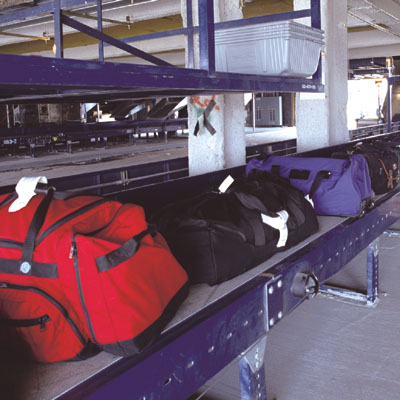 Bags lined up in a sorting station at the gate
Photo courtesy BAE Automated Systems, Inc.

There is an off-ramp at every gate in the United Airlines terminal. The bags make their way down a short conveyor to a sorting station on the ground at the gate.

At the sorting station, baggage handlers load the bags onto carts or into special containers that go right into the airplane. When loading the plane, bags that will be making a transfer after the flight are loaded into separate areas than bags that will be heading to baggage claim. A monitor at the sorting station tells the handlers which bags are going where (remember, the baggage-handling system always knows exactly where each bag is going).

After the bags are loaded into carts or containers, they are brought the short distance to the plane and loaded. Some planes are bulk loaded, meaning the bags are brought up one-by-one on a conveyor and placed into shelves in the cargo hold. Other planes are container loaded, meaning that special containers are loaded on the ground and then placed into the plane. 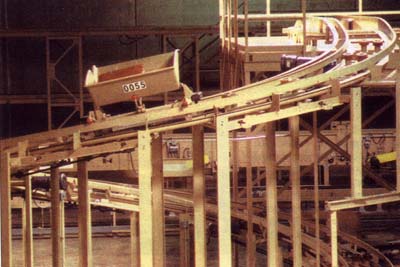 Since the United terminal is a hub, most of the people coming through it are making transfers. Again, the goal of the system is to have the bags keep up with the passengers. Generally, the people can get off the plane faster than the bags can be unloaded, so for the bags to keep up they need to be able to move between gates very quickly.

The terminal is about .6 mi long (1 km) long, and some bags may have to travel that whole distance. The terminal has two separate DCV tracks that make loops around the terminal in opposite directions.

The transferring bags are loaded onto conveyors, where they move through scanning stations and then are routed onto the DCV track. The DCV takes the bags to the proper gate and unloads them.

If you're not making a transfer, your bag has to make it to the baggage-claim area. Let's see how it gets there. 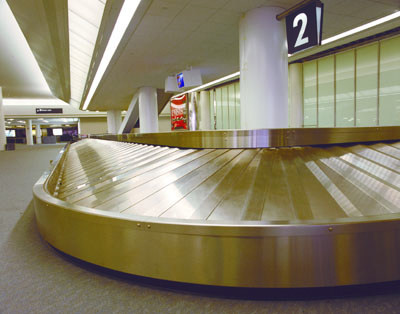 Bags coming off a plane that are staying in Denver are loaded into carts and pulled by tug to the baggage-claim area. Since the bags are already sorted when they come off the plane, it is easy to keep the transferring bags separate from the terminating bags.

When the bags get to the baggage-claim area, they are loaded onto a short conveyor that deposits them onto the carousel.

Since Denver airport is a popular destination for skiers, there is a whole separate carousel for skis.

For more information on baggage handling and related topics, check out the links on the next page.