Staying in the Air 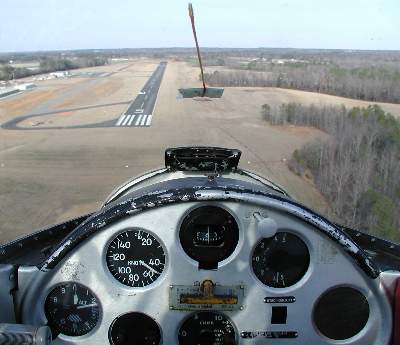 The way you measure the performance of a glider is by its glide ratio. This ratio tells you how much horizontal distance a glider can travel compared to the altitude it has to drop. Modern gliders can have glide ratios better than 60:1. This means they can glide for 60 miles if they start at an altitude of one mile. For comparison, a commercial jetliner might have glide ratios somewhere around 17:1.

If the glide ratio were the only factor involved, gliders would not be able to stay in the air nearly as long as they do. So how do they do it?

The key to staying in the air for longer periods of time is to get some help from Mother Nature whenever possible. While a glider will slowly descend with respect to the air around it, what if the air around it was moving upward faster than the glider was descending? It's kind of like trying to paddle a kayak upstream; even though you may be cutting through the water at a respectable pace, you're not really making any progress with respect to the riverbank. The same thing works with gliders. If you are descending at one meter per second, but the air around the plane is rising at two meters per second, you're actually gaining altitude.

There are three main types of rising air used by glider pilots to increase flight times:

Thermals are columns of rising air created by the heating of the Earth's surface. As the air near the ground is heated by the sun, it expands and rises. Pilots keep an eye out for terrain that absorbs the morning sun more rapidly than surrounding areas. These areas, such as asphalt parking lots, dark plowed fields and rocky terrain, are a great way to find thermal columns. Pilots also keep a look out for newly forming cumulus clouds, or even large birds soaring without flapping their wings, which can also be signs of thermal activity.

Once a thermal is located, pilots will turn back and circle within the column until they reach their desired altitude at which time they will exit and resume their flight. To prevent confusion, gliders all circle in the same direction within thermals. The first glider in the thermal gets to decide the direction -- all the other gliders that join the thermal must circle in that direction.

Ridge lift is created by winds blowing against mountains, hills or other ridges. As the air reaches the mountain, it is redirected upward and forms a band of lift along the windward side of the slope. Ridge lift typically reaches no higher than a few hundred feet higher than the terrain that creates it. What ridge lift lacks in height however, it makes up for in length; gliders have been known to fly for a thousand miles along mountain chains using mostly ridge lift and wave lift.

Wave lift is similar to ridge lift in that it is created when wind meets a mountain. Wave lift, however, is created on the leeward side of the peak by winds passing over the mountain instead of up one side. Wave lift can be identified by the unique cloud formations produced. Wave lift can reach thousands of feet high and gliders can reach altitudes of more than 35,000 feet.

The glider is yawing when it is not pointing exactly in the direction it is flying (relative to the air around it). Instead the glider is angled sideways and is "slipping" or "skidding" through the air. The string on the windshield indicates whether the glider is flying straight (string straight) or whether it is yawing (string left or right). The glider produces the least drag when it flies straight through the air. When it is yawing, the drag increases -- so in general, glider pilots try to keep the string straight.

A plane's lift, drag and glide ratio characteristics are governed solely by its construction, and are predetermined at takeoff. Without thrust, the only other characteristic that the pilot has control over (besides normal control surfaces) is the weight of the plane.

A heavier glider will sink faster that a light glider. The glide ratio is not affected by weight because while a heavier glider will sink faster, it will do so at a higher airspeed. The plane will come down faster, but will cover the same distance (at a higher speed) as a lighter glider with the same glide ratio and starting altitude. In order to help them fly faster, some gliders have tanks that can hold up to 500 pounds of water. Higher speeds are desirable for cross-country flying.

The downsides of heavier sailplanes include reduced climb rates in a lifting environment (such as a thermal) and, possibly, shorter flight duration if suitable lift cannot be located. To prevent this, the water ballast can be jettisoned at any time through dump valves, allowing the pilots to reduce the weight of the plane to increase climb rates, or to reduce speed as they come in for a landing.